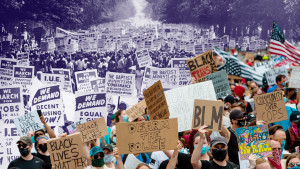 Thousands of people are expected to take to the National Mall in DC for a potentially historic march this week.

For the “Get Your Knee Off Our Necks” March on Washington. Back in May, George Floyd was killed when a Minneapolis police officer knelt on his neck for nearly nine minutes. His death was caught on video, and he was heard saying “I can’t breathe” multiple times – the same words Eric Garner said in 2014 when a NYC cop put him in a banned chokehold, killing him. The news of Floyd’s death – along with the deaths of Breonna Taylor, Ahmaud Arbery, Rayshard Brooks, and countless other Black Americans – sparked weeks of nationwide protests against police brutality and racial injustice in the US. It also forced a national dialogue about America’s deeply rooted racism, and how to rectify policies that continue to perpetuate an unequal society.

And that’s what this march is about, right?

Correct. It coincides with the 57th anniversary of the historic March on Washington, where  Martin Luther King Jr gave his famous “I Have A Dream” speech in 1963. Rev. Al Sharpton and civil rights groups are organizing the demonstration. Marchers have two main demands: the Senate should pass police reform and lawmakers should pass a bill that would protect voting rights for racial minorities.

Voting rights have been in the spotlight since congressman and civil rights icon John Lewis passed away in July. Lewis – the last living speaker of the 1963 march – spent his life fighting for and protecting voting rights. That included leading a 1965 march in Selma, Alabama where he was beaten by state troopers. That day – known as “Bloody Sunday” – is credited with rallying support for the 1965 Voting Rights Act. The landmark legislation implemented ways to protect racial minorities’ right to vote, like requiring areas with a history of voting discrimination to get “preclearance” before changing voting rules. According to the US Commission on Civil Rights, voter registration among non-white Americans spiked after the act passed.

Yes, but a 2013 Supreme Court ruling scrapped a key provision of that preclearance requirement, giving states a lot more leeway to change voting rules. In the aftermath, a number of states implemented voter ID laws and early voting restrictions – which both disproportionately affect minority voters. Lawmakers and activists want Congress to restore the 1965 law to properly honor Lewis.

Got it. So how’s the march going to work?

Initially, organizers predicted tens of thousands would show up – but it’s not clear if that’ll hold up as the number of COVID-19 cases remains high in parts of the country in recent weeks. Participants have to wear a mask and practice social distancing (though it’s unclear how that’ll be enforced). There’ll also be checkpoints where people will have their temperature taken. People who have recently been to or are traveling to DC from a COVID-19 hot spot have to quarantine for 14 days before marching.

And if I can’t be there in person…

You can get in on the action virtually. You can watch the rally, as well as other speeches and performances, on the NAACP’s site. Sharpton also said that instead of busing people in from states considered COVID-19 hotspots, those areas will host satellite marches.

Over the past few months, the country has been through a major reckoning with its long history of racism. Organizers see this march as a chance to seize the moment and lead to concrete policy change. There’s no simple fix for hundreds of years of racist policies, but there are a number of ways to make change: educate yourself and others. Call out racism when you see it. And make sure your voice is heard by voting in November.