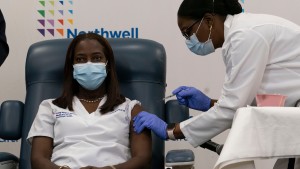 As we near the two-year anniversary of the COVID-19 pandemic, vaccines remain on the top of minds. (Like: What are the guidelines for those who are fully vaxxed? What about kids? And when can I get a booster shot?) Now, there are several COVID-19 vaccines available around the world. But only three have gotten emergency authorization or approval in the US.

Remind me, which vaccines has the US signed off on?

The FDA has given the thumbs up to: Pfizer/BioNTech, Moderna, and Johnson & Johnson. Here’s what you need to know about each…

As of early November, about 70% of American adults have received at least one dose of the three vaccines. But they’re not the only ones that exist.

What other vaccines are out there?

As of Oct 29, there are at least 128 COVID-19 vaccines in clinical development, with an additional 194 vaccine candidates in preclinical trials. But the real question on everyone’s minds is...

Are the COVID-19 vaccines safe?

With so many vaccines being created at a fast pace, first we have to dive into the development process. All of these vaccines are in different stages of development and approval. And with all the terms being thrown around – Phase 1, Phase 2, Phase 3, emergency use authorization, efficacy – it can be tough to figure out what all of this really means. So let's break it down. After researchers identify a potential vaccine candidate they start the clinical testing process.

Usually, this process can take years to complete. But these are unusual times. And researchers were able to combine phases to speed up testing, thanks to things like new technology, years of research on a virus similar to COVID-19, and the financial incentives governments are providing to support this research.

In the US, vaccine manufacturers need to get FDA approval before marketing and distribution can begin. And the steps for the approval process typically start after a successful Phase 3. A manufacturer then presents their vaccine at “science court,” where a panel of independent experts act as a jury and pick apart the vaccine. If they're satisfied with the data, they endorse it and send it off to the FDA for final approval.

In a matter of months, the US has managed to get a significant amount of its population vaccinated. But the country isn’t quite at herd immunity yet. And according to Our World in Data, only 3.7% of people in low-income countries have gotten at least one dose. Meaning: We still have a long way to go.

Last updated on Nov 2 to include the latest on the COVID-19 vaccines, including the FDA's emergency use authorization of the Pfizer vaccine for kids 5-11 and the CDC's approval for booster shots.

Last updated on Aug 23 to include that the FDA has fully approved Pfizer’s COVID-19 vaccine.