How to Organize Apps on Your iPhone 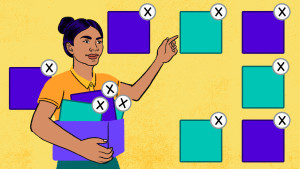 Does looking at your iPhone feel like sorting through a messy desk? It’s time to clean up your home screen.

Show me your ways.

It’s all about that app organization. If your iPhone is running on iOS 14, there’s a new feature called the App Library that may be your new best friend. To find it, swipe all the way left on your home screen. A screen with all your apps divided into categories will pop up. Categories include things like Recently Added, Social, Utilities, Productivity & Finance, and Creativity. You can find any app and open it using that search bar up top.

How does this help me get organized?

It lets you shelve what you’re not using. How many books do you keep on your bedside table? Probably only the ones you're reading at the moment. The App Library lets you keep most apps in the library, and only the ones you use all the time on your home screen. To move an app from the home screen to the library, press down on the app you want to move and click “Remove App.” You’ll then get the option to “Delete App” or “Move to App Library.” You can also delete or move apps to the library in bulk. Just long press on an app icon, and while holding down, long press on any additional apps that you want to move or throw away. Then hit “Edit Home Screen" on the initial app you selected and make your move.

How should I decide which apps to keep on the home screen?

Up to you, but usage is a good place to start. Go to Settings > Screen Time > See All Activity to get a peek at which apps you’re using the most. Keep those on the home screen and send the rest to the library. Or if there are certain apps that you use a lot but want to use less (hi, Instagram), consider removing those from the home screen so that you're not as tempted.

But I like to keep all my apps on the home screen.

We want you to be 'appy. You could try a different type of organization, like using folders. There are a lot of different ways you can organize your apps into folders. But for starters, to make a new folder: Long press on an app and drag it on top of another app. Voila, you made a little app family. Here are some ways to organize those folders:

People reportedly spend an average of about three and a half hours a day on their phones—and your home screen is HQ for all that eye traffic. Keep it organized for a more streamlined existence.