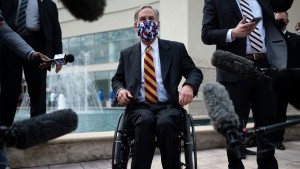 Texas is pumping the brakes on its reopening plans.

COVID-19. On May 1, Texas became one of the first states to begin easing restrictions and reopening its economy. Now, the second-most populous state in the country is seeing a "massive outbreak" in coronavirus cases, with over 50,000 active infections. In Houston, at least one hospital has already run out of ICU beds. And now, Gov. Greg Abbott (R) is putting the state's phased reopening on the backburner.

The state had already allowed some businesses (like gyms, restaurants, and malls) to reopen to some degree. But those that haven't will have to wait to put up their 'open' signs, though Abbott didn't say how long they'll have to wait. He also ordered hospitals in four of the state's largest counties to stop nonessential surgeries to make room for COVID-19 patients. Still, he says he doesn't want the state to "go backwards and close down businesses."

States that eased restrictions on the earlier side did so under pressure to help restore the economy. But some are now dealing with new outbreaks that show no signs of slowing down. And if Texas can lower the number of confirmed cases there, states may look to it as an example of how to get things under control.

Yup. Yesterday, a government watchdog said the IRS sent $1.4 billion worth of checks to people who filed taxes in 2018 and 2019 but later passed away. And that while the IRS has access to official death records, the Treasury Department – which distributed the checks – doesn't. Treasury officials said this happened because they were working to get the money out "as rapidly as possible."

People who got the money on behalf of those who died have been asked to return it – apparently by sending the check back as void or issuing another check. But it's not clear if there would be any repercussions if they don't. This all comes as President Trump has said he's considering another round of stimulus checks – something some lawmakers have been hesitant to do and could be even more reluctant to do so now.

The gov worked hard to get money in the hands of people who needed it ASAP amid COVID-19. But some say the oversight is another example of wasteful gov spending during the pandemic that comes at taxpayers' expense.

What's got the Supremes involved...

This ruling. Yesterday, SCOTUS ruled that asylum seekers have no right to a federal court hearing if their claims are denied. The case was about a Sri Lankan man who crossed the US-Mexico border in 2017 and failed to prove he had a "credible fear" of being persecuted back home during an initial screening. A 1996 law seemed to allow for speedy deportation in cases like that. But lawyers argued the man deserved to be able to appeal his case because of habeas corpus – the constitutional right to challenge unlawful detention. Now, SCOTUS is saying 'not quite.' And that people who haven't been granted full legal entry to the US don't have full constitutional rights. The ruling is a win for the Trump admin, which called it a "victory for enforcement of the immigration laws." But others pointed out that thousands of asylum seekers could be affected.

This request. Last night, the Trump admin asked the Supreme Court to overturn the Affordable Care Act (ACA). In 2017, Congress ended the financial penalty for not buying insurance, known as the individual mandate. Now Trump admin officials are saying the rest of the ACA "must fall" with the mandate. If the justices agree, the move could affect the health care coverage of an estimated 23 million Americans. House Speaker Nancy Pelosi (D-CA) criticized the admin's move for coming in the "middle of the coronavirus crisis." SCOTUS has previously ruled on two challenges to the act, leaving most of the law in place.

Which country has an update…

The Democratic Republic of Congo. Yesterday, the country's health minister said the second-deadliest Ebola outbreak in history is over. It started nearly two years ago in the northeastern part of the DRC, infecting over 3,400 people and killing over 2,200 people. Health experts credited things like vaccines and contact tracing for helping stop the spread of Ebola there.

NASA. It's naming its DC headquarters after Mary W Jackson, the agency's first Black female engineer. She was one of the mathematicians and engineers who helped send US astronauts to space in the '60s (hi, "Hidden Figures"). NASA said it will keep highlighting the work of "women, African Americans, and people of all backgrounds" who've contributed to its success.

...Oh and speaking of changes, Disney's reimagining Splash Mountain to honor Princess Tiana, its first Black princess. It's a hopeful world after all.

Who's saying 'seat belts, everyone'...

Who's not afraid of changin'...