Defund the Police: Here’s What It Means | theSkimm 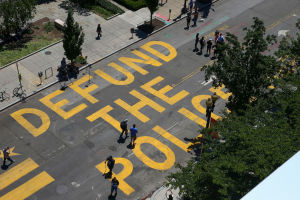 The past few weeks have led to a rallying cry to “defund the police.”

Where did the idea come from?

Activists have advocated for it for years, including in 2014 after teenager Michael Brown was shot and killed by Darren Wilson, a white police officer, in Ferguson, Missouri. But the concept didn’t get a lot of attention until recently. The police killings this year of Breonna Taylor and George Floyd have sparked worldwide protests calling for an end to systemic racial injustice and police brutality in the US. And many of these demonstrations include calls to defund the police.

Supporters say that police reform – like implicit bias training and the use of body cams meant to hold officers accountable – hasn’t worked. Police are still disproportionately using force against, and killing, black Americans. Supporters also say that the police are the ones often responding to everything from mental health issues to homelessness to drug overdoses – and that community programs could better address those problems without contributing to the overcriminalization of minorities.

It generally means cutting how much of a local budget goes to the police force. One study found that over the past few decades, state and local spending on police in the US has almost tripled – costing about $115 billion in 2017 – despite crime rates going down. The goal is to reallocate money to social services like housing, education, and mental health resources. But some say that doesn’t go far enough.

There are also advocates for disbanding…meaning eliminating police departments entirely. Instead of having local departments, advocates of disbanding say communities should restructure their public safety systems to have people like social workers and mental health providers act as first responders. They say that these professionals are more in tune with community needs.

Yes, but not for the same reasons as people are calling for today. In 2000, the city of Compton, California disbanded its police department amid high levels of crime. The county sheriff’s department took over policing. In 2013, Camden, New Jersey disbanded its department, saying that expensive union contracts were keeping the city from hiring enough officers to respond to a spike in crime. It replaced the department with a new force to cover the county. But Camden has also adopted strict guidelines for when officers can use force and emphasizes de-escalation. Homicides there have dropped by more than half in the past couple of years, and excessive force complaints are down 95% since 2014.

On Sunday, the Minneapolis City Council said it would disband its police department of more than 800 officers. The city’s mayor has said he’s against it – but there are enough council members who support it to make it veto-proof. It's unclear when this will take effect. The council says it's still working on the details of what would replace the police department but that it’ll have a community-based approach.

New York City Mayor Bill de Blasio promised to shift some funding from the city’s police department – which gets $6 billion a year – to youth and social services but he hasn’t put out an exact number. And Los Angeles Mayor Eric Garcetti has said he’d cut as much as $150 million from the LAPD’s projected $1.8 billion budget and increase spending in programs for health care, jobs and “peace centers.”

What do police say about this?

They’ve pushed back, arguing police are necessary to keep cities safe. DC’s police chief said underfunding agencies could lead to more incidents of “excessive force.” Attorney General William Barr said dismantling police departments would lead to “more killings” in American cities. And in the past, police unions have been particularly resistant to reforms.

As hundreds of thousands of people have protested in the weeks since George Floyd’s death, the movement to reform police departments has quickly gained traction. Now, officials across the country are vowing to make changes. But it’s not clear exactly how far they’ll go, especially as many demonstrators have called for getting rid of police departments altogether.