“It’s Just Plastic”: The No Plastics Movement is Having A Moment | theSkimm
Subscribe

“It’s Just Plastic”: The No Plastics Movement is Having A Moment 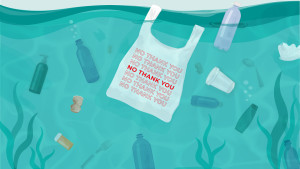 People are seeing video showing animals being hurt or dying after consuming plastic. They’re also seeing waterways clogged with mostly-plastic garbage. Now they’re starting to say ‘bye, forever’ to everything from plastic bags to straws to plastic clothes. No plastic is a movement that’s gaining momentum.

When plastic first came on the scene, it was a revolution. And helped people. It started out with piano keys and wiring, but in World War II, oil companies started a side hustle with plastic - making planes and body armor safer. Plastic saved lives. And made women’s legs run free.

After the war, plastics were sold to the people as a “little luxury”: “throwaway” plates and “silverware” didn’t have to be washed. Tupperware became a thing. And plastic designers started using cheap, light, easily moldable plastic in everything from toothbrushes to t-shirts, furniture and cars. And of course, plastic packaging.

So what’s the problem?

Plastic doesn’t go away. And it’s really hard to recycle. It’s either too small, too strong, or too dirty. And it’s filling up landfills and getting in waterways - 8 million metric tons per year. And more to come. There’s a garbage island of plastic floating in the Pacific.

Cool. Awesome. Great. So how can I help?

A lot of people concerned about plastics feel like the onus is on them, that if they were better at cleaning up their trash, we wouldn’t be in this mess. But it’s really hard to live a life without plastic because it’s just in everything nowadays: even in the good stuff, like medical equipment.

But people are starting to be more conscious of their daily plastic use: toting around silverware instead of picking up a plastic fork, and saying “no, thanks” to plastic straws. More people are trying plastic-free living and offering ideas to make it an easier way of life. Governments are getting on board: the E.U. just banned a bunch of single-use plastics starting two years from now. New York’s banning plastic foam containers. San Francisco’s considering a ban on those little plastic shampoo and conditioner bottles in hotel rooms. And companies are starting to see a market in no-plastics.

Plastic used to be nowhere and now, it’s everywhere. It’s helped save a lot of lives, but now it’s doing a lot of harm -- especially to the environment. Countries, companies and people are taking notice -- and one way they’re starting to do that is by saying “no more” to single-use plastics. Some people are going a step further - and saying “no plastics” altogether.