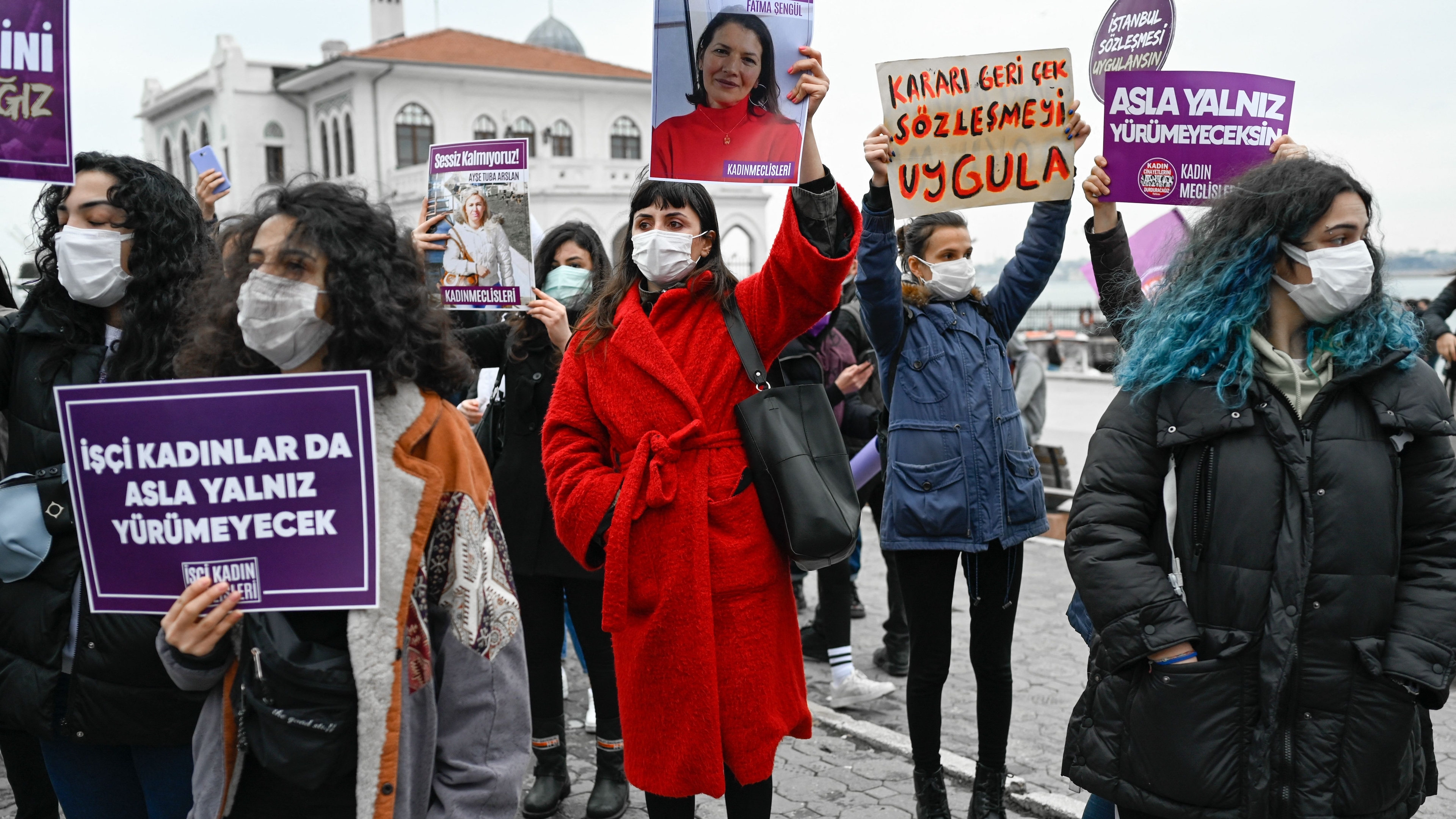 Turkey's made it harder to prosecute domestic violence.

In 2011, Turkey signed the Istanbul Convention. The European treaty – ratified by 34 countries – called on governments to commit to ending violence against women, prosecuting those responsible, protecting the victims, and promoting women's equal rights. But that hasn't always happened. In Turkey, femicide (murdering of women and girls) has reportedly tripled in the past 10 years. At least 300 were killed last year. And by one tally, 77 women have been killed so far in 2021. The real numbers could be higher. And now there's concern things could get worse.

On Saturday, President Recep Tayyip Erdoğan scratched Turkey off of the Istanbul Convention list. No reason was given. But it came after months of criticism from Turkish conservatives who said the treaty encouraged divorce and undermined traditional roles in families. And argued the agreement's measure on equal rights was promoting LGBTQ+ rights – something Turkey's cracked down on in recent years. Now, Erdoğan – whose popularity has slipped and who's up for reelection in 2023 – appears to be listening to his conservative base.

Hundreds of Turkish women took to the streets in response, calling on the gov to stick with the treaty. The Council of Europe – which is responsible for the agreement – called Turkey's decision "devastating." And President Biden called it a step back for women everywhere. Turkey maintains that women are protected under the constitution.

What's got people calling for change…

Anti-Asian attacks. On Saturday, hundreds of people gathered across the country, rallying against hate. Last week, a gunman killed eight people at three spas in or near Atlanta, Georgia. Six of the victims were Asian women. A 21-year-old white man has been charged with eight counts of murder. But the heinous attacks came as major cities across the country saw a rise (nearly 150%) in anti-Asian hate crimes last year. And many people are calling for the attacks to be labeled a hate crime. Now, Americans from California to New York have been amplifying calls for change, protesting with signs like "Stop Asian Hate."

This report. Over the weekend, The New York Times published a report that looked into how police handled the Black Lives Matter protests across the country. Spoiler: It wasn't good. Last summer, hundreds of thousands of Americans protested against police brutality and systemic racism. Officers responded with tear gas, pepper spray, batons, and rubber bullets. Thousands were arrested and at least six were killed. Now, the report – a review of reports by watchdogs, consultants, and independent investigators in several major cities – says most officers hadn't been adequately trained to police the protests. That they responded too aggressively (with militarized tactics). That they were unprepared. And that they faced problems when it came to planning, logistics, and leadership.

AstraZeneca. Today, the company released findings in a US-based clinical trial, showing its vaccine is 79% effective at preventing symptomatic COVID-19. And said it showed 100% efficacy at preventing severe disease and hospitalization. The AstraZeneca vaccine hasn't been approved for emergency use in the US. And several countries have temporarily suspended its use following 37 reported blood clots. European regulators and the World Health Organization have maintained the vaccine is safe. Now, AstraZeneca's saying its latest trial showed no safety concerns.

What's not singing 'bienvenidos a Miami'...

Miami Beach. On Saturday, city officials declared a state of emergency in its entertainment district amid a large surge in tourism. Miami Beach has been flooded by spring breakers who are trying to soak up some sun. The Sunshine State is quite the appeal since coronavirus restrictions are practically nonexistent and there are a lot of cheap flights. But the influx of visitors has led to massive crowds with many not wearing masks or social distancing. And the spring breakers' 'anything goes' mentality has led to dozens of arrests. In response, the city implemented an 8pm curfew until at least April 11. And officials are saying it all became more than they could "handle."

...Oh and speaking of crowd control, organizers have banned foreign spectators from the Tokyo Olympics and Paralympic Games.

Who's always up for a challenge…

Former President Barack Obama. We asked him to Skimm his book, "A Promised Land," in 60 seconds. And spoke to him about his journey to the White House, what campaign life was like on the road, and how he balances politics and family.

What your significant other will be begging you to watch…