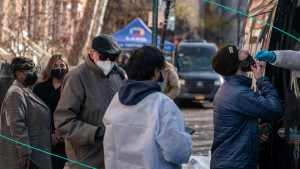 It feels like everyone in New York has COVID-19.

It does. What are the facts?

That more than 8% of COVID tests there are coming back positive. By the time you read this that could be higher. Cases are doubling about every two days. Delta still accounts for a share of the surge, but Omicron could reportedly become the dominant variant as soon as this week. Dr. Anthony Fauci is warning it will cause record-high hospitalizations and deaths. The departing NIH director says the US can expect as many as 1 million cases per day.

This is a lot to handle.

It is. Here’s what we know: vaccines are down to around 30-40% efficacy at preventing infection. But boosters like Pfizer’s and Moderna’s may reduce cases of symptomatic disease by as much as 75%. That still means we can expect breakthrough cases. But every bit helps. And big venues are taking action, fast. The NFL, NHL, and NBA are postponing and canceling games. The Rockettes are saying ‘see you next year.’ So same, same as 2020…but different.

What can I do when everyone in the group text says ‘I tested positive?’

Get tested. Easier said than done when CityMD lines look like last year’s lines at Trader Joe’s. At-home rapid tests aren’t always easy to find. If you’re experiencing symptoms, take care of yourself and try to protect others. The evidence isn’t yet out on whether Omicron is milder than other variants. In NYC, hospitalizations are reportedly up 64% in just two weeks. And rather than take medication advice from TikTok, talk to your doctor about your options.

No one wants to be back here. But as the most populous city in the country, New York tends to serve as a warning sign for what’s to come elsewhere. Stay safe, NY, and for everyone else: take notes.

PS: With Omicron cases rising, we're still learning details about the variant. Here's what we know so far.

Who’s just not feeling it…

Sen. Joe Manchin (D-WV).* Yesterday, Manchin said he “cannot vote” for President Biden’s roughly $2 trillion spending bill. The announcement throws a wrench into Dems’ plans for the bill on everything from free pre-k to paid family leave to efforts to curb carbon emissions. Manchin said he was most concerned that the bill was adding to the more than $28 trillion national debt. Also, that it could fuel already skyrocketing inflation. WH press secretary Jen Psaki called Manchin’s position a “breach of his commitments to the President and the Senator's colleagues.” Now the bill goes back to the drawing board — just as Congress is OOO for the holidays. And it comes as Manchin is threatening to block a change to filibuster rules that would allow Dems to pass their voting rights bill.

Where times are changing...

Chile. Yesterday, leftist Gabriel Boric won the country's presidential runoff election. The 35-year-old — who ran on increasing corporate taxes and reducing the environmental effects of mining — will be Chile's youngest-ever president. His win signals the country (which has seen many anti-gov protests in the last two years) is headed away from the right-wing wave that swept across South America (see: Brazil, Colombia). And could be a sign of what's to come for the region.

Where democracy isn't taken for granted...

Hong Kong.* Yesterday, Hong Kongers turned out to vote in the territory’s “patriots-only” legislative election. It is the lowest voter turnout since China imposed a national security law last year that lets police crack down on the territory's pro-democracy protests. And after a separate measure, only “patriots” are allowed to stand for election and hold political positions. Critics say the law weakens democracy. But Hong Kong officials say it’s ensuring stability after protests in recent years.

Who we’re saying farewell to…

Former Sen. Johnny Isakson (R-GA). Yesterday, the long-time senator died at the age of 76. Isakson had served in Congress for decades and helped overhaul the veterans' health care system. And was known to work closely with both sides of the aisle. He resigned in 2019 citing health concerns from Parkinson’s disease. Georgia Gov. Brian Kemp (R) said the Peach State “lost a giant” and that he was “dedicated to making his state and country better than he found it." Voting rights activist and GA gubernatorial candidate Stacey Abrams said he "served the whole of Georgia with attention and fairness."

When there's "No Way Home" for the holidays...

At least Spider-Man made it to the box office.