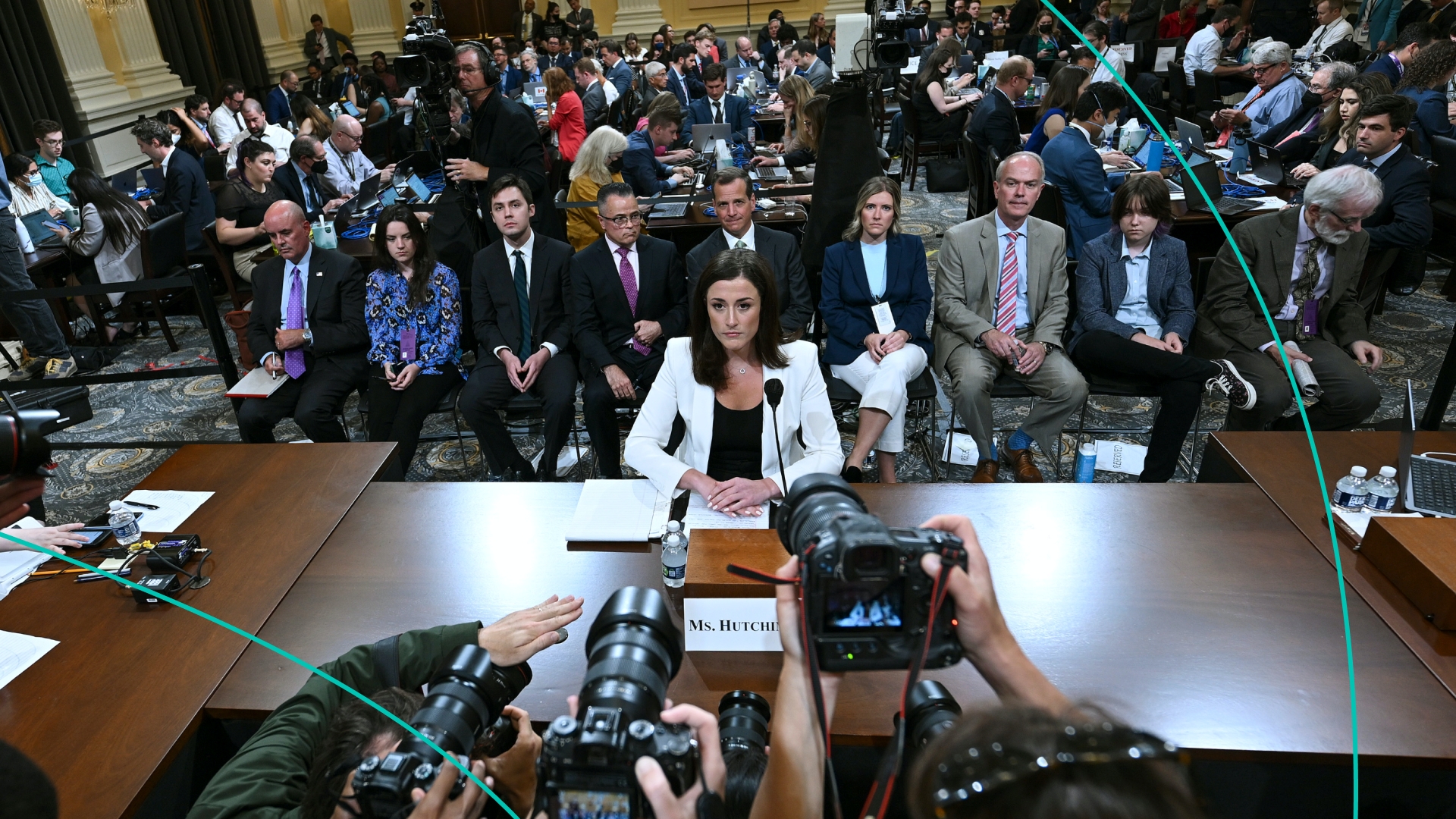 Yesterday, Cassidy Hutchinson — a former aide to White House chief of staff Mark Meadows — delivered her testimony. Here were some of the big talkers…

What Trump knew: Hutchinson testified that former President Trump knew some of his supporters were armed with weapons before urging them to march to the Capitol. She also said that she overheard Trump demanding to remove magnetometers (aka what the Secret Service uses to find hidden weapons), saying the protesters weren’t there to hurt him.

Trump’s behavior: Citing secondhand information, Hutchinson said Trump demanded he be taken to the Capitol after his speech, saying something along the lines of ‘I’m the f-ing president.’ And that he even tried grabbing the car’s steering wheel and possibly lunged at the throat of a Secret Service agent.

Others’ roles: After the Jan 6 attacks, Hutchinson said that Meadows and Trump lawyer Rudy Giuliani were both looking for presidential pardons. Hutchinson also testified that the WH chief of staff knew the attacks were getting violent at the Capitol. But that he didn’t intervene.

Critics questioned Hutchinson's credibility, saying some of her stories were 'fake news.' Meanwhile, Trump allies claim all of this was 'hearsay' and that her testimony wouldn't stand a chance in a courtroom. Yesterday's hearing is expected to be the last hearing of the month. It comes as federal agents seized the phone of John Eastman, a lawyer who helped advise Trump on efforts to overturn the election. The panel also said they had “very serious concerns” about instances of witness tampering coming from Trump allies — and that they will work on the next steps.

The latest Jan 6 testimonies give more insight into the admin’s big players on the day of the insurrection. Now it's up to the panel to decide how to move forward as more evidence is brought to light.

Yesterday, a judge in Texas temporarily blocked an almost century-old abortion ban from going into effect. The judge said that the 1925 law — which had clinics stop services — had been repealed and goes against more recent state law. The move means that until July 12, some clinics can resume abortions without facing criminal prosecution. In the meantime, the state’s six-week ban is still in effect — meaning abortions must take place before many even know they’re pregnant. An even more restrictive law is set to go into effect in the coming weeks.

Lawsuits have become a last-ditch attempt for some clinics to continue providing services in states with trigger bans. On Monday, judges in Louisiana and Utah blocked trigger laws, with activists respectively arguing that the laws are unclear and violate equal protection clauses. Abortion providers in Idaho, Kentucky, and Mississippi are also pursuing legal action.

PS: The Center for Reproductive Rights and the ACLU were behind the Texas lawsuit. We talked to them — and other advocacy orgs — about their operations in a post-Roe world.

Monkeypox. Yesterday, the Biden admin announced its expanding its vaccine strategy to combat the spread of the virus. The CDC said at least 56,000 doses will be available immediately for those who may have been exposed to the virus. It's a slight change from before when vaccines were only available for those who had known exposure to monkeypox. Since May, there have been more than 4,000 cases of monkeypox around the world and more than 300 cases in the US. Monkeypox is in the same family as smallpox but is historically less severe. The virus is transmitted to humans from animals and spreads from one person to another by close contact. Recent cases have mostly been spreading through sexual partners. Now, the admin will be shipping monkeypox vaccines to states and will focus on those with higher cases. The gov expects over 1.6 million doses to be available in the US by the end of the year.

Finland and Sweden. Yesterday, Turkey agreed to support their NATO membership. Last month, the two Nordic countries announced they want to make things official with NATO. But Turkey’s President Recep Tayyip Erdoğan said ‘nope.’ He accused both countries of supporting a terrorist org, aka the Kurdistan Workers’ Party — which has called for an independent Kurdish state within Turkey. That complicated things, because applicants need approval from all of NATO’s 30 members. But now, the countries have agreed to no longer support the group, lift arms restrictions, and work on extradition requests, putting the beef to bed. And Finland and Sweden are on their way to being the new kids in NATO. The alliance will vote to accept the bid today.

Ghislaine Maxwell. Yesterday, Jeffrey Epstein’s former girlfriend and longtime associate was sentenced to 20 years in prison after being found guilty on five of six felony counts — including sex trafficking of minors. We’ve got more on the trial here.

The primaries. Yesterday, voters in eight states went to the polls. In Colorado, businessman Joe O’Dea (R), who supports some abortion rights, won the Republican nomination and will go against Democratic US Sen. Michael Bennet in November. In Ilinois, incumbent Rep. Mary Miller (R) — who once quoted Adolf Hitler — won her primary race. And In Oklahoma, Republicans Rep. Markwayne Mullin and TW Shannon will face off in a GOP primary runoff as they eye the US Senate in a special election.

Spotify’s getting the (karaoke) party started.

While you may be feeling euphoric…

So is Miss International Queen 2022.

What could be a formula for success…