College costs: What drives the problem 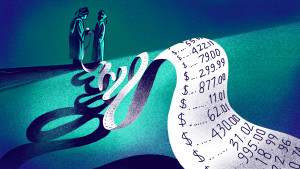 We’ll get straight to the point: college can be expensive.

Thank you, Captain Obvious. How’d we get here?

First, a history lesson. Colleges in the US date back to the 1600s and 1700s, when colonialists were trying to make sure people around them were down with G-O-D. Those first colleges – including Harvard, William and Mary, and Yale – were founded on the basis of religion, in order to prep students for things like life in the ministry. But as the population grew throughout the late 18th and 19th centuries, hundreds of schools opened, including the first public colleges.

Ok bring me into modern times.

Roger that. College enrollment skyrocketed in the 20th century, especially after WWII, when the GI Bill made college affordable for veterans. Millions flooded the higher education system. More colleges started opening in order to meet demand. Plus the federal gov started giving out loans, making college even more accessible. In 1980, a four-year college cost the equivalent of less than $10,000 a year on average in today’s dollars. Today, it’s more than $23,000 a year.

Thanks for reminding me that I have thousands in student loans. WTF happened?

Good question. We’ll break down some of the specifics in a sec, but essentially college tuition rates passed go, collected way more than $200, and have been outpacing inflation for decades. Wages haven’t kept up with these increases and states have rolled back funding for public universities. Meaning two things: 1. Heading to (or staying in) college is too expensive for some Americans or 2. Students and their families are taking out loans in crippling amounts.

Today, more than 44 million Americans have student loan debt. Students who take out loans graduate with an average of $30,000 in debt. If you're one of them, we've got tips to help you pay off that debt.

Excuse me while I go cry into my pillow.

We know. But here’s what’s driving people to continue chasing that toga party life: College access may help expand the US economy and improve social mobility. There’s evidence that more educated workers are more productive. Research shows that when kids from the lowest family income bracket get college degrees, they are over four times more likely to move out of that bracket. Studies show that Americans with college degrees on average earn 84% more than those with just a high school diploma, adding up to about $1 million over the course of their lifetimes on average.

Is there a but?

Kinda. The key words here are ‘on average.’ A quarter of people with college degrees don’t earn any more than the average high school student. One-third of college grads are underemployed (not making full use of their skills) and around 13% of recent grads are in low-paying jobs.

You said you were going to get into specifics. Why does college cost so much?

We get into that, the impact on the US economy, and the solutions on the table, in theSkimm app. Every week, the app goes deep on a different news topic to give you the context you need to understand what's going on in the world. Download the app now and you get the first week free.