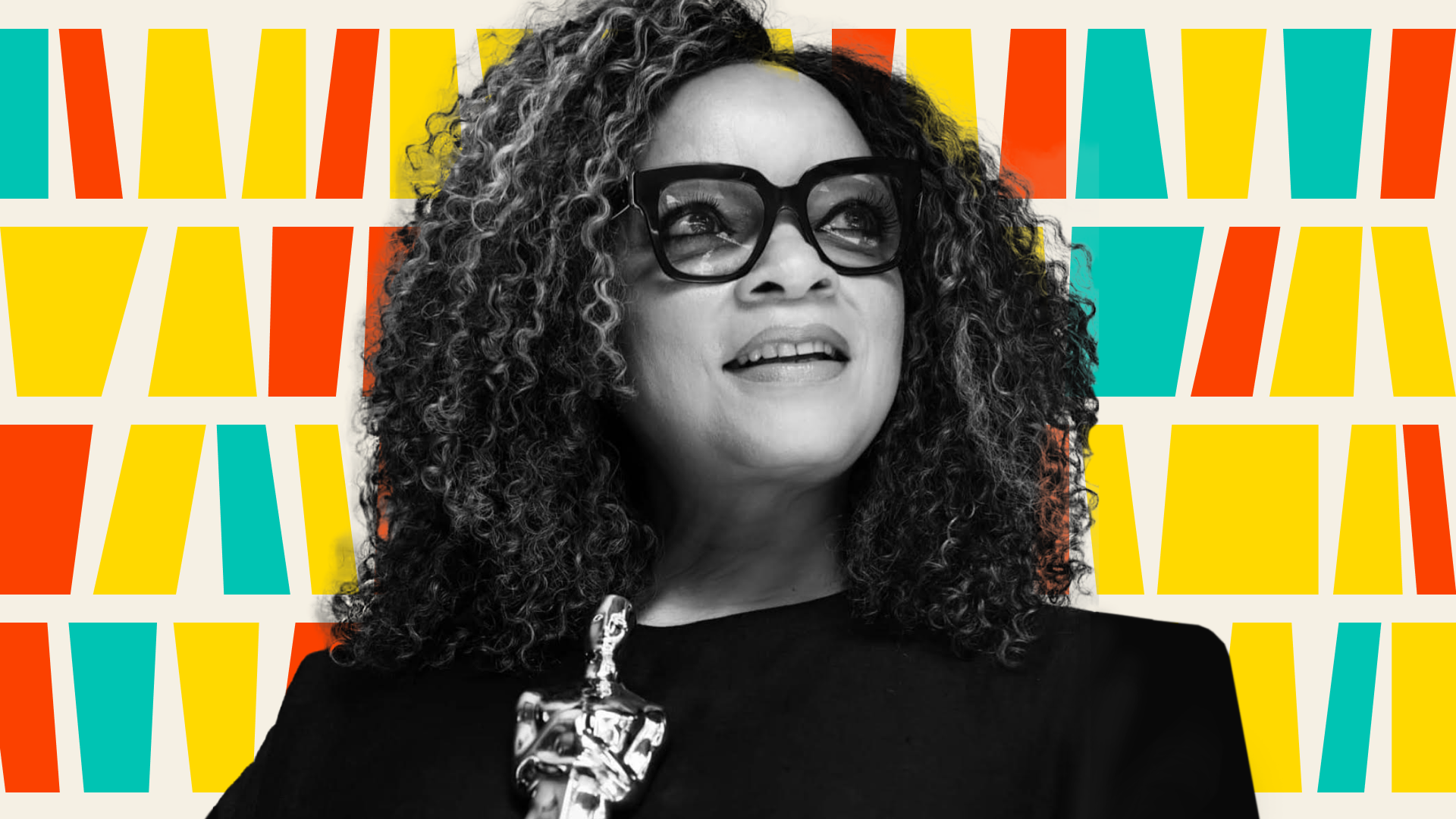 In celebration of Black History Month, we’re spotlighting Black, female culture carriers who are pushing representation forward in different industries. Up first: costume designer pro Ruth E. Carter. She’s outfitted major films like “Malcolm X,” “Selma,” and “Do the Right Thing.” And became the first African American to win an Oscar for costume design for her work in “Black Panther.”

Carter’s love for costume design began in the early ‘80s while attending Hampton University, a historically Black college. As a student, she worked in the college’s wardrobe department. And by the age of 28, Spike Lee recruited her for his film “School Daze.” She went on to work with Lee on 14 more films. And has since designed for top-notch filmmakers like Ryan Coogler, Lee Daniels, Ava DuVernay, John Singleton, and Steven Spielberg.

Sitting down with theSkimm, Carter talked about diversity in Hollywood (or lack thereof), how she infuses Black culture in her work, and more. Check out what she had to say below. And scroll to the end for her book & podcast recommendations.

“I'm a thespian at heart. I have done 60 projects throughout my 35-plus year career. I started in theater, went to [the Santa Fe Opera] as an intern, and really fell in love with costume design. Now, I'm here as a film costume designer — working with studios like Marvel, and doing projects that go from the period piece to fantasy, to superhero.”

What made you want to go into costume design?

“I really loved visualizing great stories. I grew up reading a lot of literature — everything from Alice Walker, James Baldwin, Lorraine Hansberry, to ‘Lord of the Rings.’ And, I love the visual story that collected in my brain. When I figured out that there was a profession that would make characters come to life. I was all in. [But] fashion came much later.

“As a matter of fact, I was very intimidated about my fashion knowledge. And I relied on really good assistants, who came out of the fashion industry, to guide and help navigate [me] through the fashion field.

“I think both professions — fashion and costuming — do start with a story. They [the fashion industry] start with a muse or an iconic person that they are inspired by to create a line of clothing. But [in costuming] we're actually very finite in our storytelling. There's a real beginning, middle, and end. Therefore we're on a journey that doesn't have an open hand.”

People are beginning to wake up to the lack of diversity in Hollywood. How did it feel to break the barrier as the first African American to win an Oscar for costume design?

“If you can imagine me as a young costume designer, being fully aware that no one of African American descent had won the Oscar for costume design. I was really aware of it. And because I'm aware of that, I'm also aware that as a filmmaker, working with the likes of Spike Lee, Robert Townsend, Keenen Ivory Wayans, we were all trying to break those barriers. Hollywood had this tunnel vision of images of us and our stories.

“​​So we were already kind of a band of filmmakers that wanted to bring images into Hollywood that were more like what we saw at home or in our community. And Hollywood was not portraying those images with a true likeness, in our opinion. And as a behind the scenes person, there wasn't enough representation [in that space] that looked like me [either].

“There were people who were working in more supportive roles — supervisors, costumers — but there was no [person of color] leading as a designer. I always wanted it to be me, but I still was wondering when and if that day would come.

“And when it did, it didn't impact me as far as a ‘first.’ It impacted me when I saw how it influenced so many people…When I saw little girls dressed in Dora Milaje costumes and feeling empowered. Or young costume designers in studio services around Hollywood pulling together their show. And I didn't know them, but I could see what I didn't see in the beginning of my career, and it felt very natural — like they belonged. And that's when the impact of winning really hit.”

How do you think the industry can make progress when it comes to diversity and inclusion?

“I realize so much every day how we take any culture and we generalize it. We had an opportunity to change the broad brush stroke of how our representation was misrepresented. Now, we have an opportunity to dig in and get the details of all cultures. We're not generalizing any more.

You've helped carry Black culture forward with your work on films like “Black Panther,” “Selma,” “Malcolm X,” and “Do The Right Thing.” How do you bring Black culture to life through your work? And what effect do you think costumes have on storytelling?

“When I first started, I really adored images that I would see of James Van Der Zee. Or if I would see a setting in Harlem in New York and see people walking the streets and their clothing…they weren't Vogue models, they were real people. And I wanted those images to come to life. I wanted to be the person who could actually recreate some of those wonderful portrait photographs that you see, like Teenie Harris.

“I made it my mission. Because I come out of theater, and theater loves to be detailed. It's where I started, and also how I wanted to project my film life — in a theatrical way.

“So my intro to costuming and culture was because I cared and wanted to see these people that I thought were important to our history. When I'm dressing people for even background players or day players — Pullman porters, teachers, laborers, and marchers — I think through the lens of care.

“I will go the extra mile to talk to people who were descendants of the Selma march. I talked to them about what the day felt like and what they remember…When I get to set, I'm not only a costume designer, I’m actually curating a picture that speaks to history and the experience.

“It doesn't even matter if it's my culture. We had Korean waiters in the casino scene in ‘Black Panther.’ I wanted them to wear original hanbok — a traditional form of dress for Korean women. I had an assistant who was Korean. I contacted her and we hired a Korean hanbok designer to make the cocktail waitresses’ clothes. And that’s what makes it special for me and undeniable.

“None of us are perfect. Sometimes we get into the fantasy of things. We might make a misstep, or it might not be cultural enough for some, but the overall attempt is there: to bring culture in its most authentic way.”

The Savannah College of Art and Design’s featured an exhibition of your work titled “Afrofuturism in Costume Design.” How do you define Afrofuturism? And how do you plan on incorporating it in your future work?

“The true definition of Afrofuture is to take the African culture and infuse technology and science… But I redefined it for myself. Afrofuture is looking through the lens of your own culture in an aspirational way. Where is it going? How can I contribute to my culture? And in a way that moves things forward? I think of Spike Lee in the early days of ‘Do the Right Thing.’ He had instilled in us this sense of tomorrow. This sense of, ‘How can we uplift the culture and breathe new life into how we go about doing things?’

“On a bigger level, Afrofuture does mean that we are more accepting of each other — of our future together. When I think about Ava DuVernay on the set of ‘Selma,’ I feel that she was embodying her own Afrofuture. She was a publicist, and now she's a director. And directing this great, historic moment. So Afrofuture to me is the way that we use our culture that is fresh and new and forward. And incorporates as much technology as we can garner.”

What advice do you have for someone looking to get into costume design?

“Things are changing all the time. I used to tell that person who wanted to get into costume design to maybe do it the way that I did it. And I realized that maybe the way I did it isn't as available anymore.

We asked Carter to Skimm some of her milestones, based on her Insta photos. Here’s what she had to say:

“I had an opportunity to be the commencement speaker at my alma mater. And I never picked up my diploma. Because when you have an outstanding bill when you graduate, they give you the booklet, but there's no diploma inside.

“So that was…1984? And I just got my diploma from the president of the school [in 2019]. He was the incoming president when I was a freshman…He's retiring this year, but he gave me my diploma and he showed me that it had all the right signatures on it. It was sitting in a file in the administrative office. So I was receiving my bachelor's degree, what, 30 years later? I just never went back and got the actual piece of paper.”

“I was backstage [at the awards show] and the handlers that take you around everywhere to get interviewed and photographed told me, ‘In this section, the photographers really want you to be animated.’ And there was a cape to my dress. I felt it swishing around all night. So I was like, ‘This is going to be my moment to really sashay.’”

“I received a star on the Hollywood Walk of Fame. I'm right on the corner of Hollywood and Highland. I couldn't have a better spot. I'm right there at the crosswalk, in front of the souvenir shop. I love the placement of where this is.

“It was an ‘aha’ moment. As much as I dreamed about being the first to win the Oscar — or just winning the Oscar, period — I never dreamed that I would get a star. I never even thought about it. So having it was just as big as getting the Oscar.”

“Talib Kweli. He talks a lot about the music industry and hip hop. He goes back to my heyday of rap from the late eighties, early nineties. I like how revolutionary he is.”

Who is your favorite Black designer?

“I have so many. But MAXHOSA, by Laduma. I love his knitwear. It’s bright, it’s happy, it’s geometric. It’s African, without being too African — it’s just fabulous. The color combinations are always fresh.”