Is Russia Going to Invade Ukraine? Their History, Explained 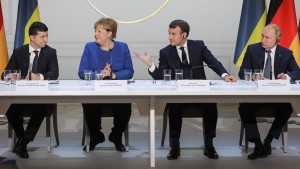 Russia’s had Ukraine on its wish list for years. And has long been against Ukraine cozying up to the West. Now, following a growing number of cease-fire violations between the two countries, tensions are at a high — again. And both sides continue to blame the other. But Russia has upped the ante this time. And has built up their military at Ukraine's border to a "lethal scale," according to a US official. Here's what you need to know about how this started. And the US's role in the conflict.

A History Recap: Russia and Ukraine

For decades, both countries were part of the Soviet Union. But after its collapse in 1991, more than 90% of Ukrainians voted to become an independent country — breaking away from the USSR. Ever since, the relationship between Russia and Ukraine has been complicated.

One expert says the two are “joined at hip” — literally, because they share a border. And figuratively, for a number of reasons. While Ukrainian is the official language of Ukraine, many also speak Russian. Families are spread out across the two, something that apparently happened in part because of migration during the Soviet era. The Kremlin has even described Ukrainians and Russians as “one people.” But the big question that’s always loomed over Ukraine’s government is if it should buddy-up with Russia or the West. Russia wants to maintain influence over  Ukraine — especially since it was part of the Soviet Union. And the US says it wants to ensure Ukraine is a “free and democratic state.”

In 2014, the game of tug-of-war reached a peak. When Ukraine’s pro-Russian President Viktor Yanukovych decided to put a trade pact with the EU on hold, Ukrainians took to the streets to protest. And Yanukovych got the boot from office as a pro-Western interim gov took the reins. And, surprise, Russia wasn’t happy about that.

Pro-Russian separatists took over government buildings in Crimea, with the Kremlin throwing its weight behind them. And by March 2014, Russia had formally annexed the peninsula — resulting in an ongoing eight-year conflict between the two nations. The conflict has left more than 13,000 dead.

A peace deal was brokered in 2015 (with France and Germany helping out). It was agreed that Ukraine would regain full control of its borders. But things are still tense there.

For years, Russian President Vladimir Putin has been tightening his grip on its neighbor. Think: offering Russian citizenship to Ukrainians, building a military presence along the border, and warning NATO to stay back.

Ukraine and Russia Today: Why There’s Turmoil at Their Border

On Dec. 3, a leaked US intel report found that Russia could invade Ukraine as early as 2022. American and Ukrainian intel believe there’s anywhere from 70,000 to 94,000 Russian soldiers stationed along the Ukrainian-Russian border. And that number could go up to 175,000 in the coming weeks. The Kremlin’s also been working on spreading disinformation campaigns so Ukraine and NATO look like the bad guys.

But Putin is no fan of NATO, given its Western ties. He said Ukraine joining the alliance would cross a “red line.” And isn’t too happy with NATO allies giving the Ukrainian military weapons and holding joint drills. He reportedly said “threats are mounting” on Russia’s border.

The US’s Role in the Ukraine-Russia Conflict

President Biden has a relationship with the Ukrainian gov dating back to his VP days. (Remember: He was the vice president during the 2014 annexation of Crimea.) Back then, he criticized the Kremlin’s move as a “blatant violation of international law.”

Now, the US is ready to get involved in the dispute should Russia invade Ukraine. Biden and Putin spent nearly two hours on a video conference call in early December. But it reportedly doesn’t look like they got very far. Biden warned Putin that the US will implement severe economic consequences if the invasion happens. But he said the US does not have plans to send troops to Ukraine. In a Kremlin readout of the meeting, Putin reportedly pinned the tension on the West and demanded a legal guarantee that Ukraine will not be able to join NATO. Russia has continued to deny that it plans to invade Ukraine.

But TBD what’s next and if Russia will actually invade Ukraine.

All eyes are on the Russian-Ukrainian border — waiting to see if Putin is going to cash in on his bluff to invade Ukraine. Or if it’s a ploy to make sure Zelensky doesn’t get to join NATO. And it’s a vital moment for the US as Biden looks to reassert the country as a major superpower that can check Russia.