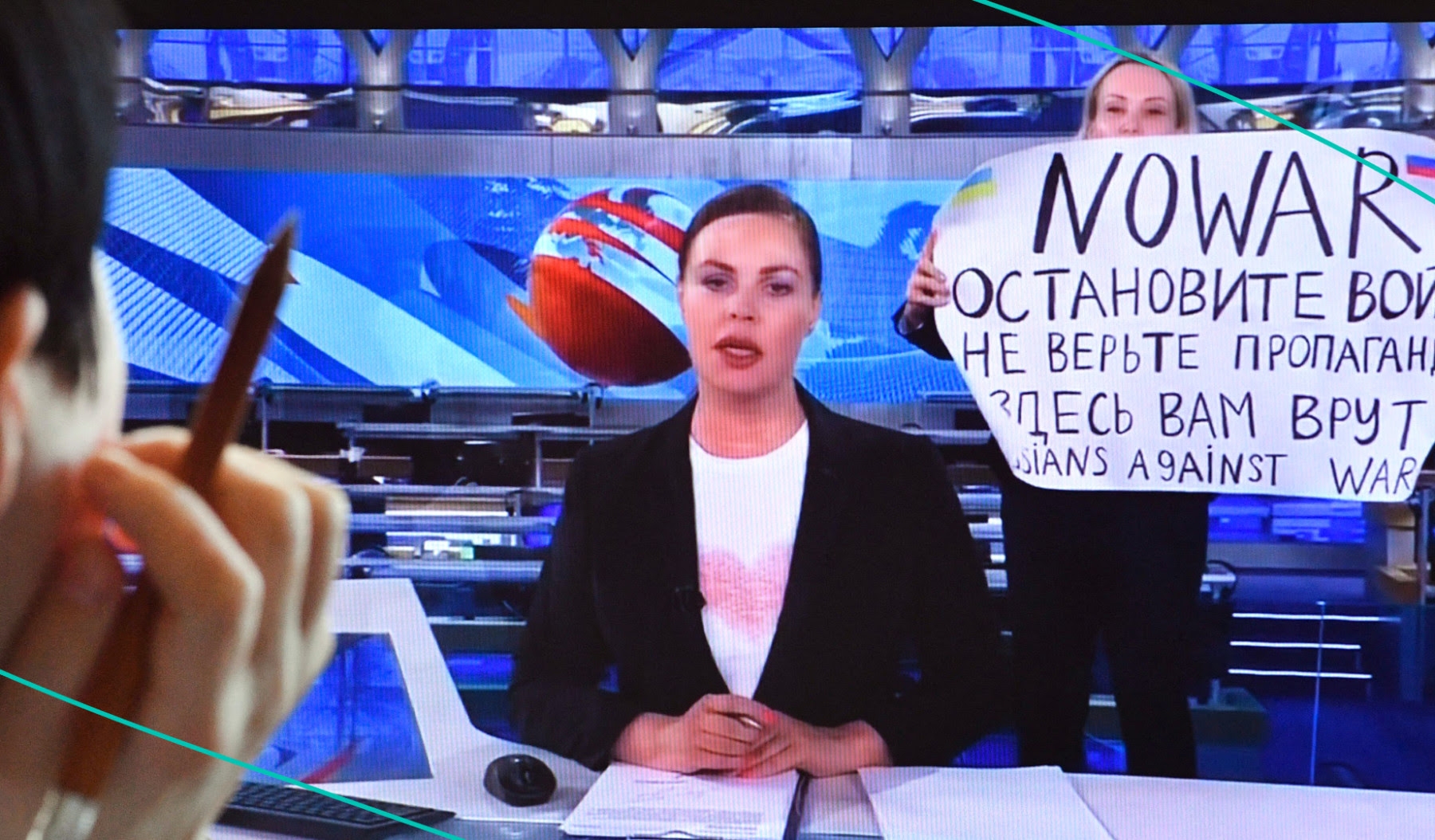 The Russia-Ukraine war is intensifying every day. With millions of people being forced to leave their homes. And hundreds of others killed. Amid all the devastation, Russia’s been cracking down on people who speak out against the Kremlin. Thousands have been arrested. And a new law threatens people with years in prison if they speak against the Kremlin’s “special military operation.” But Russian journalist Marina Ovsyannikova hasn’t let the gov scare her from becoming a prominent anti-war protester. Here’s what you need to know about her — and how she grabbed the world’s attention.

How Marina Ovsyannikova Made Global Headlines

Ovsyannikova worked for Russian state-controlled TV Channel One. And on March 14, she burst onto a live broadcast to protest her employer's coverage of the war. She held a sign reading “Don’t believe the propaganda. They’re lying to you here,” and “Russians against the war.” And chanted “stop the war,” before the news network cut away.

Shortly after, authorities arrested Ovsyannikova. She was fined 30,000 rubles (or $280). But, plot twist: It wasn’t for her news stunt. The journo was detained and fined over a social media post. Ovsyannikova posted a video, where she said she was "ashamed" to work for the TV station and called on Russians to protest the war.

Later Ovsyannikova told reporters that she was interrogated for 14 hours and wasn't allowed to sleep for two days. Now, she could face up to 15 years in prison for her on-air protest under a new law. It punishes anyone who spreads "false information" about the war in Ukraine. But she’s yet to be formally charged.

Why Ovsyannikova’s Risking Her Life

During her first interview with a US broadcast network, Ovsyannikova said she couldn’t eat or sleep when the war began in February. And that she knew that what her employer showed on TV was “very different from what was going on in reality.” Ovsyannikova hoped that exposing Russian propaganda could “maybe stimulate some people to speak up against the war.” And told the world that Russians don’t want “​​Putin's war.”

What’s Next For The Russian Journalist

France has offered her asylum. But despite fearing for her family’s safety, she and her children want to live in Russia. Ovsyannikova said her family’s had a “very comfortable life” and doesn’t want to move and “lose another 10 years…to assimilate in some other country.” She continues to urge people to “think critically and analyze the information that is being presented.”

Marina Ovsyannikova’s one-woman protest has been praised by the West. And has put a spotlight on Russian opposition to the war. But it also highlights the Kremlin’s propaganda efforts — and the dangers people could face if they tell the truth about the Russian gov.

Expert advice on what to do if the conflict is weighing on you.