Can Employers Require Workers to be Vaccinated Against COVID-19? 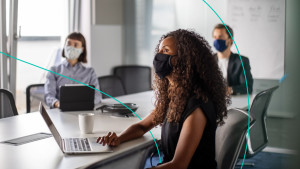 About 60% of all US adults are fully vaccinated against COVID-19. And as many continue to head back to or prep for their return to office in 2022, employees have some questions. So we’re diving in with one: Can employers mandate COVID-19 vaccines for their employees?

In late May, the US Equal Employment Opportunity Commission (EEOC) updated its guidance to say that yes, employers can require employees to get a vaccine before returning to the office. Reminder: The EEOC enforces federal law that makes it illegal to discriminate against employees or job applicants based on factors like race, color, religion, and age.

But the commission said that vaccine mandates have to abide by the Americans with Disabilities Act and Civil Rights Act. Meaning: If someone can’t get vaccinated because of a disability, religious belief, or other reason, companies have to accommodate those employees and keep their info confidential. One accommodation example the EEOC gave in its guidance is for an unvaccinated employee who’s in the office to wear a face mask or social distance from coworkers.

The EEOC also said that companies can offer incentives to employees to encourage them to get a shot — as long as it’s not “coercive” (though it didn’t elaborate on what is considered coercive). Some businesses have already jumped on that bandwagon and have offered perks like extra PTO or pay, including American Airlines, Dollar General, and Trader Joe’s. And the US Chamber of Commerce has more info on ways to incentivize employees to get vaccinated.

HIPAA and Your Vaccination Status

There’ve been posts on social media claiming that asking about vaccine status is a violation of HIPAA. Here’s the reality: The Health Insurance Portability and Accountability Act of 1996 — aka HIPAA — created national standards for protecting patients’ personal health info. But experts say the protection only applies to certain health entities (think: health care providers or insurance companies). So businesses or individuals can ask you about your vaccination status without violating the law. But experts also say you don’t have to give up that info if you don’t want to (though there may be consequences, like not being allowed in a certain business).

Psst…See what US Surgeon General Vivek Murthy had to say about it here.

As the delta variant continues to sweep through the nation in recent months, President Joe Biden and his administration have decided to take action.

In July, the Department of Veteran Affairs became the first federal agency to require its health care workers to get vaccinated against COVID-19. Weeks later, Defense Secretary Lloyd Austin said US service members would be required to get a shot by Sept. 15. They could face punishment for refusing to get vaccinated, though there’ll be exemptions for health or religious beliefs.

Then, in September, Biden unveiled a six-part plan requiring vaccinations for nearly 100 million Americans. Including...

Local governments are mandating vaccines too. In December, NYC became the first in the nation to announce a vaccine mandate for all private-sector employees in the city. Workers will need to be vaxxed by Dec. 27.

And don’t expect vaccine mandates to go away anytime soon. On Aug. 23, Pfizer became the first COVID-19 vaccine in the US to get full FDA approval — which then encouraged some businesses (like Goldman Sachs and Chevron) to impose vaccine mandates. And as we continue to learn more about the new omicron variant, companies may feel motivated to set up a mandate for their workers.

In April, Houston Methodist Hospital became one of the first hospitals in the nation to require its employees to be vaccinated against COVID-19. The privately-run hospital said they could fire employees that were unvaccinated or didn’t get a medical or religious exemption to the rule.

In May, 117 staffers sued, claiming that it’s illegal for their employer to make them get an “experimental” vaccine in order for them to keep their jobs, comparing themselves to “guinea pigs.” (Note: 178 of the hospital’s roughly 26,000 employees were suspended in early June for not following the guideline.)

In June, a federal judge said ‘case dismissed,’ saying that Houston Methodist didn’t do anything illegal and calling the claims about the vaccine “false.” The judge’s decision appears to be the first ruling to side with employer-mandated vaccines for workers. But the employees have appealed the decision.

Following the Houston Methodist Hospital case, a number of companies have announced that they will require some or all of their employees to be vaccinated. That includes…

The Pros and Cons of Vaccine Mandates

The debate over vaccine mandates in the workplace raises questions about effectiveness and legality. Here’s a look at both sides of the argument…

Whether you support or oppose vaccine mandates in the workplace, experts say an employer vaccine mandate could be more complicated than it sounds — and potentially lead to lawsuits.

A mandate could essentially force a company to closely monitor employees in the office and create tension. An expert shared this example with The New York Times: “When you see an employee without a mask, are you going to run back to HR and verify that that person really was fully vaccinated?”

Another problem is vaccine inequity. While many Americans have gotten at least one dose of the vaccine, some face barriers when trying to get a vaccine. The racial and ethnic vaccine gap is closing in the US, but there’s still work to be done — and systemic racism in health care likely isn’t helping.

The CDC has also reported that vaccination rates are higher in urban counties than rural counties, which may face issues like fewer pharmacies or unreliable internet. The EEOC says employers should keep vaccine equity issues in mind if requiring employees to be vaccinated, and that “some employees may be more likely to be negatively impacted by a vaccination requirement."

COVID-19 vaccine mandates in the workplace have now reached every corner of the country. And while many employers are choosing to require vaccination for employees to return, it's important to remember that this issue is not as cut and dry as it might sound. If you feel comfortable speaking to your HR team about your thoughts on an office-wide mandate, reach out to make sure your voice is heard.

Updated on Dec. 8 to include NYC’s private-sector vaccine mandate.

Updated on Nov. 9 to include the first legal challenge to Biden's vaccine mandate for private employers with 100 or more workers.