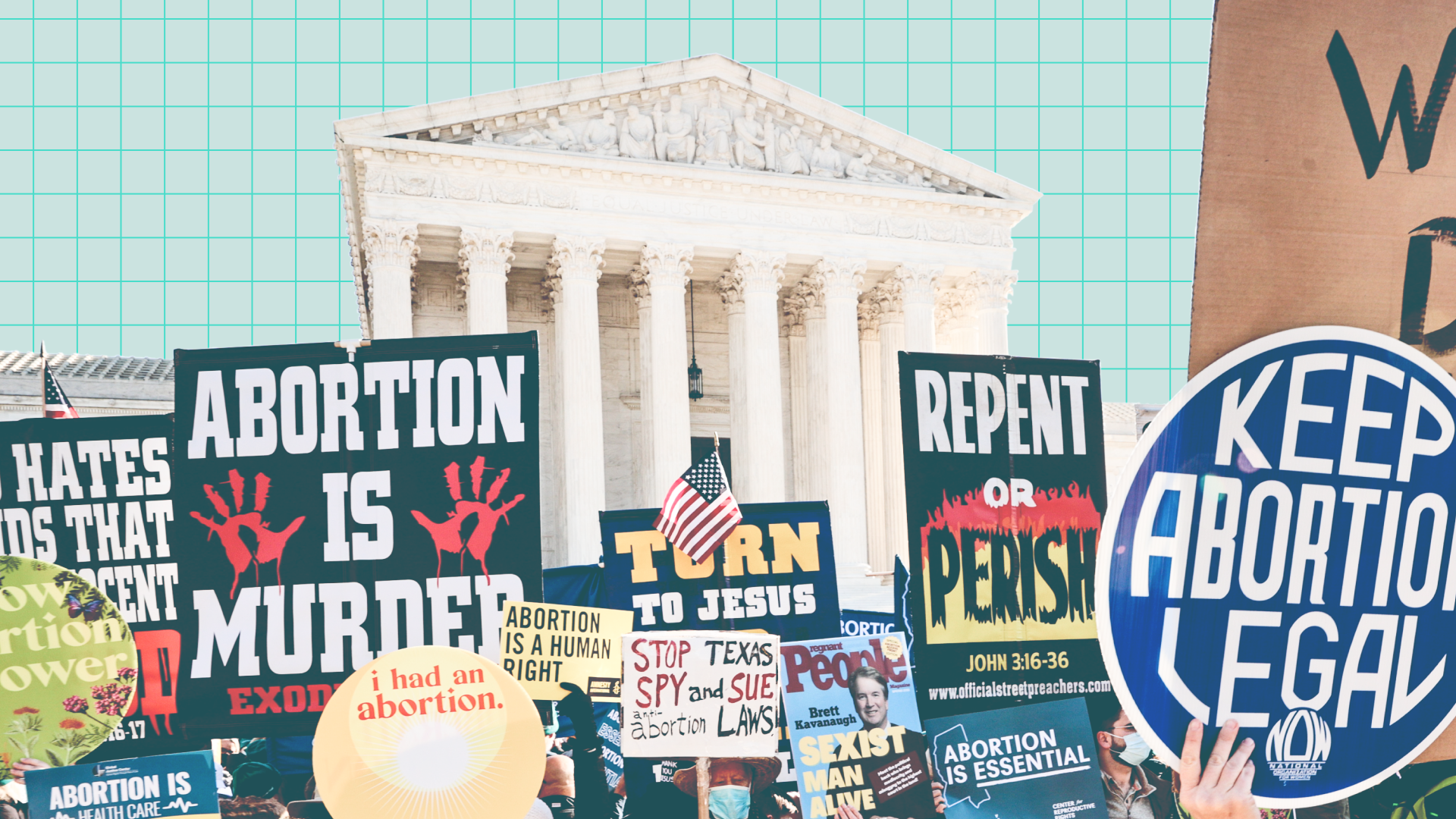 Where Do Americans Stand On Abortion? The Truth’s Complicated.

The abortion debate typically sways between being anti-abortion or being for abortion rights. But is it possible to identify as both? Spoiler: It’s complicated. Here’s what experts are saying about Americans’ complex attitudes toward abortion. And why it matters.
Photo: Getty Images | Design: Camille Rapay
fbtwitteremail
Jun 24, 2022Skimm'd by Maria del Carmen Corpus, Maria McCallen, Alicia Valenski, Kamini Ramdeen-Chowdhury, Clem Robineau, and Niven McCall-Mazza

On June 24, the Supreme Court overturned Roe v. Wade, ending the federal right to an abortion. This comes after a draft of the SCOTUS decision on abortion was leaked to the public in May.

The issue's long been divisive. And drove an even bigger wedge between Americans in the 1970s — after the landmark ruling came down. Since then, the right to choose has become incredibly polarized as the GOP’s ushered in an era of hundreds of abortion restrictions.

SCOTUS’ ruling sparked conversations about people’s own views and where public opinion stands on abortion. But, spoiler: Humans are complicated. And so are their views on abortion. Meaning, it’s not as simple as labeling someone for abortion rights or anti-abortion. So theSkimm asked experts: What's America's real stance on abortion? Here's what we're diving into:

When it comes to Americans’ views on abortion, surveys say…

In a survey theSkimm did in May, we asked our audience similar questions. But gave them the choice to identify as “undecided.” Overall, 96% of Skimm’rs believe abortion should be legal in at least some cases — higher than the general population. And 2% said it should be illegal in all cases. While another 2% were undecided.

But what does ‘some’ or ‘most’ cases mean? What are the circumstances people are considering when they’re answering? Hannah Hartig, research associate at Pew, explained that pollsters have long suspected there are complex views behind people’s answers. So, they decided to take a deep dive in this year’s survey.

“We really wanted to dig under the hood on what these all-encompassing words actually mean for people,” she said. “This is one of the first times we've done such an extensive survey on just one topic.”

The results? People don't have an absolutist view on abortion. Meaning...

Abortion attitudes tend to fall into a gray area

Contrary to what you may hear or see on the news, views on abortion are diverse and abundant. And that’s what makes polling public opinion on the topic so challenging. Hartig said the latest Pew survey confirmed that beliefs on abortion are deeply personal.

“It's something that touches many different considerations: religion, views on morality, views about the law and when the law should come into play…and whether it should or shouldn't,” she added.

Tresa Undem is the co-founder of PerryUndem — a non-partisan public opinion research firm. And has been been conducting research on abortion for nearly 20 years. She says people typically land in a gray area as they consider 'what if' questions in the abortion debate.

“There's all different kinds of circumstances and situations,” Undem said. “Even like: Do you support or oppose waiting periods? [And the answer is] I support. Well, what if that means somebody has to make an additional appointment and they can’t get off work? Oh well, then I oppose. So you go through all of these what-ifs. And that’s where I see people land.”

Researchers like Hartig and Undem have found that people’s stance on abortion varies depending on the situation. Including…

The stage of pregnancy

In the Pew survey, results showed that people’s support of legal abortion declined the further along a person was in their pregnancy. Example: Americans are more likely to support an abortion at six weeks (typically when a fetal “heartbeat” can be detected) than at 24 weeks (at or around fetal viability).

Skimm’rs felt the same way. Our survey found that 87% of Skimm’rs supported abortion at six weeks, no exceptions. But that dwindled down to 7% at 24 weeks.

The reasons people get an abortion

Kristen Jozkowski is a professor in sexual health at the Indiana University School of Public Health-Bloomington. She found that views can change depending on the reasons people get an abortion.

“Rape, incest, fetal anomalies or if the pregnant person's life is in danger…those are circumstances where there's generally more support [for abortion],” Jozkowski said. “And then other circumstances [that] warrant less support…are abortions sought for more financial reasons or because someone doesn't think that they can handle more kids.” For context, about six in 10 pregnant people who have abortions are already moms.

But Hartig said that about 50% of US adults said there are instances when abortion is morally wrong, but should still remain legal. (Though the survey didn't give examples.) And that people might consider their personal or religious views on abortion.

For pollsters like Undem, they’ve found that the majority of Americans want “the individuals involved making decisions, not the government.” Aka, a doctor and their patient versus lawmakers.

But Pew found that most Americans are open to some restrictions on abortion. For example, seven in 10 people said doctors should be required to notify a parent or guardian if a minor’s seeking an abortion.

If you’re uninformed or misinformed

Undem added that the average American isn't fully aware of the current state of abortion rights or access across the country. “Nor do they know much about abortion, generally: how safe it is, who has abortions, why, how often, how common it is, who provides abortion.”

For Jozkowski, people’s lack of knowledge around abortion came across right after the SCOTUS draft leak. “A significant percentage of folks [didn’t] really know that Roe v. Wade pertains to abortion…There is a lack of understanding about some of these issues…People do still have opinions about things that they don't know about. But it may be difficult to truly assess the extent that people want something or support something if they don't exactly know what they're being asked about.”

Sophie Riese, theSkimm's senior manager for consumer insights in data and analytics, created theSkimm's survey mentioned above. She said she came across misinformation in some respondents’ answers.

“We did ask the question: Do you believe that abortion is more dangerous than pregnancy and giving birth?” Riese said. “And we saw that the majority of the people who said that [they’re against] abortion [also] believe that it’s more dangerous than pregnancy and childbirth.” Which is not true. Experts have cited data showing that legal abortion is safer than childbirth. Note: The US has the highest maternal mortality rate of any developed country. And Black women are disproportionately at risk.

Why public opinion on abortion is important

The abortion debate appears to be framed as you’re either for or against abortion, according to researchers. And there’s been little room to highlight the reality that Americans have a variety of viewpoints.

“In my anecdotal observation, [there seems to be more] extreme perspectives in terms of restricting abortion,” Jozkowski said. “I think the media mirrors that probably because they're reporting on these legislations. There's this dichotomy that there's opposition and support — painting opposition as a ban or complete [inaccessibility] to abortion and then support as all out access.”

But polls are starting to reveal the different attitudes on abortion. According to Hartig, part of the motivation behind Pew’s surveys is to spark conversations. “It's a way to say, ‘okay, here's another way of looking at a topic,” she said. “You can take and run with it.’”

Riese also believes this data can help people explore different ideas. “What is the information that we can provide so that [people] understand where [they] may be relative to others, but also how to talk to other people about why [they] think abortion access is important,” she said.

And those conversations have started to come across. Riese highlighted that respondents were very engaged with the survey and have provided feedback on how it’s helped. “There were people who said, ‘Wow, this is great because I always thought I was anti-abortion. But now that I've thought about these scenarios, I realize it's so much more complicated.’”

How the abortion debate plays into midterm elections

There are polls on just about everything. And, you guessed it, there’s one measuring how abortion may affect Americans’ votes in the November midterms. One recent Gallup poll found that 27% of registered voters will only vote for a candidate who shares their views on abortion. That’s the highest ever in an election year. On the other end, 16% said abortion won’t impact their vote. But now that SCOTUS has officially revoked abortion rights at the federal level, public opinion may change.

Meanwhile, President Biden, who called the ruling "a sad day for the court and the country," and other Dems are urging voters to elect lawmakers who support abortion rights — both at the state and federal level. Dems are hoping to focus on states where this issue could lead to greater voter turnout and a win for their party. Including in swing states like Wisconsin and Michigan. But it’s unclear if abortion will outweigh other issues like inflation for some voters — something Republicans are focused on.

The abortion debate is often depicted as a black-and-white issue. But many Americans fall into a gray area. Amid the reversal of Roe v. Wade, we can look to the data to get a sense of how complex and personal peoples’ viewpoints really are. And how those perspectives may play into the larger conversation as legislation and elections unfold.