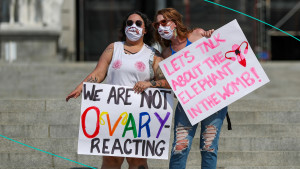 On Dec 1, the Supreme Court heard oral arguments for the most significant challenge to Roe v. Wade in nearly three decades. The conservative-majority bench is weighing the constitutionality of Mississippi’s 15-week abortion ban. And early signs show they may uphold it —  a move that could upend 50 years of abortion rights rulings. That same month, the Supreme Court also issued a ruling around Texas’s controversial abortion ban.

Learn more about the cases below. But first, we’re Skimming the history of legal battles that shaped abortion laws in the US, and how they led to the challenges we’re seeing today — in Mississippi and beyond...

In 1973, the Supreme Court ruled in the landmark Roe v. Wade decision that women have a constitutional right to an abortion. Before that, abortion was mostly illegal, although women still got them. But it was often dangerous, expensive, and required some women to travel far. And the stakes were higher for women who had no access to abortion clinics. In some cases, women tried to induce an abortion on themselves by using coat hangers or consuming poison.

But some women pushed back. From the late 1960s until 1973, a group called “Jane” operated as a secret abortion network. They offered affordable abortions (about $100, compared to $500-$1,000). And took security seriously: Women had to leave a voice message on an answering machine, and a member of Jane would call them back. And some patients were reportedly led to the procedure location blindfolded. The group disbanded after Roe v. Wade went into effect.

Background on the case: In 1969, a Texas woman named Norma McCorvey (known as Jane Roe in later court documents) became pregnant and wanted an abortion. But Texas law only allowed abortions if the mother’s life was at risk. So McCorvey sued the Dallas County district attorney, Henry Wade. The case made it all the way to the Supreme Court, which ruled 7-2 that the constitutional right to privacy protects a woman’s right to an abortion.

But the ruling left a lot of the specifics up to the states, which have since passed laws that outline very different ways of handling abortion. Like requiring a minor to get a parent to sign off, requiring patients to get an ultrasound before having an abortion, or banning late-term (after about 24 weeks) abortions. Since then, abortion laws have faced many challenges, including…

In recent years, there’s been a renewed push to roll back abortion rights across the US. Here’s why: After former President Trump took office in 2016, he overhauled the nation’s courts by appointing dozens of conservative judges, including three to the highest court there is: the Supreme Court. (See: Justices Neil Gorsuch, Brett Kavanaugh, and Amy Coney Barrett.) That led to a push by red states to pass restrictive abortion bills that lawmakers hope will be challenged in court. The goal: bring this fight to the Supremes at a time when the court has a conservative majority and may be more likely to overturn Roe v. Wade. This brings us to...

In 2018, Mississippi’s Republican-led state legislature passed a law that banned most abortions after 15 weeks. Lower courts ruled against it, saying it goes against the Supremes’ precedent with Roe v. Wade. But Mississippi urged the court to overturn Roe v. Wade, calling the ruling “egregiously wrong.”

Abortion rights advocates are worried that the justices could side with Mississippi. And put an end to Roe v. Wade. And they might be right. After nearly two hours of oral arguments, a majority of the justices suggested they were ready to discard the standard. The specifics:

SCOTUS isn’t likely to announce a decision until June 2022. While they mull over their decision, other states are working to narrow abortion rights at home.

Status of Abortion Restrictions Passed in 2021

This year alone, more than 561 abortion restrictions were intro’d across the country — at least 97 have already been enacted. Some states that have made moves on this include...

And then, there’s Texas…

It passed one of the most restrictive abortion laws in the country. Starting in September, it banned abortions after a fetal heartbeat is detected. There are also no exceptions for cases of rape or incest. And while a number of red states have passed similar bills in recent years, Texas is doing things differently.

Here’s why: The law gives private citizens — not state officials — the power to enforce the abortion ban. Meaning people can sue abortion providers, friends, and family members who they believe violated the law or helped someone get an abortion (Think: by providing financial assistance or driving someone to a clinic). And they can get at least $10,000 if they’re successful. Note: the patient getting an abortion can’t be sued.

Since the law took effect on Sept 1, abortion providers have seen visitations plummet. And reports have shown the impact the law has had on women in the Lone Star State: The 19th chronicled the experiences at an abortion care clinic in the state hours before the law took effect. The Texas Tribune reported that health clinics in other states are getting inundated with patients from Texas. And Alan Braid, a physician in San Antonio, wrote an op-ed saying that he violated the state law on Sept 6, because he says he “had a duty of care to this patient,” and because the patient “has a fundamental right to receive this care.” He's since been sued by two people, and neither of them live in Texas.

Legally, the ban has been a rollercoaster. In early October, a federal judge temporarily halted the law, accusing state legislators of an "aggressive scheme" to rob citizens of their constitutional right to get an abortion. Days later, a court of appeals reinstated it. The Department of Justice asked the courts to halt the law again, and turned to the Supreme Court to take action. But Texas AG Ken Paxton delivered a rebuttal — urging the high court to keep the law in place while lawsuits play out. To date, SCOTUS has refused to block the law. But it heard two challenges against the measure on Nov 1.

The Future of Abortion Rights in the US

Supporters and critics of abortion alike are now eagerly waiting for the Supreme Court’s decisions on the MS case and TX cases. If Roe v. Wade were overturned, abortion policy would fall to states. And some states have trigger laws that would automatically outlaw abortion. Poor people would be most affected since the majority of people who get abortions are low-income and can’t afford to travel as far for the procedure.

Meanwhile, the federal gov is hoping to make some changes with abortion rights, including with…

2022 won’t just be an important year because of the potential SCOTUS ruling — there’s also the midterm elections. And, surprise: abortion is expected to be a key issue. Like we said: depending on how the bench rules on the Mississippi abortion case, it could give lawmakers more power to regulate abortion. And while there’s no presidential race in 2022, you’ll be able to vote for lawmakers who can vote on abortion legislation or confirm a president’s Supreme Court justice nominee. (Think: Potentially influencing the court’s future rulings on cases.)

Abortion is a complex issue that encompasses debates around privacy, women’s rights, and the role of government, as well as difficult questions about when life begins. For many Americans, it’s not as cut and dry as politics increasingly make it out to be.

Updated on Dec 10 to reflect the Supreme Court’s ruling allowing abortion providers to challenge the six-week abortion ban in Texas.

Updated on Dec 1 to include oral arguments on Mississippi's challenge to Roe v. Wade.