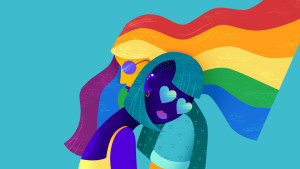 More than one in three LGBTQ+ Americans (including more than three in five transgender Americans) faced discrimination in 2020. And, unsurprisingly, that mistreatment worsened their mental well being.

It gets worse. Especially for Black, Hispanic, Asian, and multiracial people. One study found that 43% of non-white respondents reported experiencing discrimination in some form in the past year. That’s compared with 31% of white LGBTQ+ respondents. Across the board, LGBTQ+ people are at an increased risk of mental health challenges (such as depression and anxiety disorders) and suicide, compared to straight and cisgender people of the same age. And a 2019 survey from the US Department of Health and Human Services found more than 47% of LGB adults said they had a mental illness. (A similar survey of just adult women showed that 24.5% said they had one.)

What else is impacting the LGBTQ+ community's mental health?

Minority stress, aka when people from historically marginalized groups experience mental health problems because repeated prejudice against them creates a hostile social environment, is real. Particularly for transgender older adults, bisexual women, and LGBTQ+ people of color. A study of areas with high anti-LGBTQ+ prejudice showed that social stigma associated with sexual orientation has a significant impact on quality and length of life for LGBTQ+ individuals. And the risk of developing or worsening mental health issues has only intensified during the pandemic for this group, because of added job uncertainty, a home environment that might not affirm their identity, and social isolation.

It wasn’t long ago that being gay was considered a medical disorder and mental illness. The American Psychiatric Association listed it as a “sociopathic personality disturbance” in 1952. In 1968, it was recategorized as a form of “sexual deviation.” The classification of homosexuality as a mental illness was finally removed in 1973, but the stigma’s continued. Also relevant: conversion “therapy.” About 20 US states have laws protecting minors from it, Queen Elizabeth II recently announced that the UK is set to ban it, and Canada just formally took the step. Yet, an estimated 700,000 LGBTQ+ people in America have gone through it. It’s a practice that seeks to change a person’s sexual orientation or gender identity. And it’s proven to be damaging to mental health. The man who founded one of America’s most well-known conversion therapy programs has even called it a “lie” and admitted it’s “very harmful.”

Why are we stuck in place?

A number of politicians and policies are resisting progress. It wasn’t until the ‘60s and ‘70s that some states began decriminalizing sodomy (including consensual anal sex between males). About a dozen states still have some form of anti-sodomy laws in effect, despite a 2003 Supreme Court decision which declared them unconstitutional. And although same-sex marriage has been legal in all 50 states since 2015, the Vatican recently said that the Catholic Church still won’t bless it (though some German priests are giving it their blessing). Another example: Wisconsin became the first state to outlaw discrimination based on sexual orientation in 1982. But it wasn’t until 2020 that the US Supreme Court ruled workplace discrimination “because of…sex” included an individual’s sexual orientation and gender identity. Even now, a number of new anti-transgender bills are getting attention.

This year, more than 30 states have proposed — and so far at least five states have actually passed — laws that limit the ability for young transgender people to receive certain medical treatments or play on sports teams that match their gender identity (see: Florida’s bill signed into law on June 1). And 62% of Americans surveyed think that transgender athletes should only be allowed on the teams that correspond with their birth gender. That’s despite the fact that studies show that allowing trans women and girls to play on girls' and women's teams doesn’t create an unfair advantage. And the fact that leaving transgender athletes out can cause serious damage to their mental health. Meanwhile, the NCAA has come out in support of transgender athletes, but Caitlyn Jenner has done the opposite. And although the International Olympic Committee has had some trans-inclusive policies for more than a decade, it hasn’t been entirely welcoming to intersex athletes and those with naturally high levels of testosterone who identify as female (see: runner Caster Semenya). But the Tokyo Games had a record number of LGBTQ+ athletes (including the first transgender athlete). And now the IOC is changing things up a bit, with new guidance for each sport’s international governing body. Like discouraging unnecessary medical testing to verify an athlete’s sex. And emphasizing that testosterone levels alone can’t predict how an athlete will perform. They say the focus should actually be on whether there’s evidence of a performance advantage. Stay tuned for the 2022 Winter Olympics in Beijing.

That’s a lot of dark clouds.

But here’s the start of a rainbow. The Biden administration has made a number of pro-LGBTQ+ decisions. The gov restored protections for transgender and gay people against health care discrimination, repealed a ban on transgender troops in the military, and extended federal nondiscrimination protections to cover LGBTQ+ people. And the House passed the Equality Act to ban discrimination based on sexual orientation and gender identity. Plus, the first openly transgender US Senate official was confirmed as assistant health secretary. Meet: Rachel Levine.

It’s true. Especially when LGBTQ+ individuals still report facing obstacles when trying to access medical care. Nearly three in 10 transgender individuals and 15% of LGBTQ+ Americans overall reported postponing or avoiding medical treatment due to discrimination in 2020. And when it comes to family planning, there’s still stigma around same-sex adoption that could negatively affect parents’ mental health.

How can I be a better ally?

Volunteer at a place like a local LGBTQ+ Center or the Human Rights Campaign. Or donate time or money to The Trevor Project, which specifically supports LGBTQ+ youth. That age group is dealing with high rates of mental illness and suicide (More than 40% of high school students who identify as LGBTQ+ said they seriously considered attempting it in the last year.). Learn the best terms to use (and which to avoid) so you’re able to converse about sexuality and identity with sensitivity. Prioritize creating an inclusive atmosphere, which could mean anything from sharing your gender pronouns (you can now do that easily on Instagram) to bringing diverse groups of people together or being open to learning something new. Check in on your friends who might be fighting mental health battles quietly. Vote, and consider LGBTQ+ progress when you do. Don’t make assumptions about people and be willing to listen openly.

LGBTQ+ people have been fighting for civil rights for decades, but progress is slow and stigma persists. And that stigma adds to a growing list of mental health challenges. If you or someone you know is struggling with anxiety or depression, which may stem from feeling discriminated against, it could be time to seek professional help. Resources like this, this, this, or this can help you find a clinician who's knowledgeable and understanding of issues that affect the LGBTQ+ community.