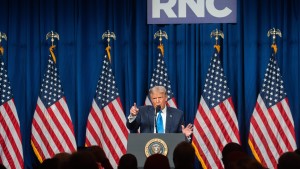 On the first day of the Republican National Convention, President Trump said there could be a "rigged election" this November.

It's too early for this.

Stay with us, it's important. For months, the president has claimed that mail-in voting would lead to voter fraud in November. And has used this argument to oppose funding for the USPS, whose delivery delays have raised concerns about voter suppression. Yesterday, the Republican Party officially nominated Trump at the RNC in Charlotte, North Carolina. And Trump seized the moment by claiming the only way he wouldn't win a second term is if Democrats stole "millions of votes"...aka rigged the election. Let's break that down:

The claim: The president said that Dems are using the coronavirus pandemic "to steal an election." And that they'll use "the whole post office scam" to win in an election year in which millions of Americans could submit a mail-in ballot.

The reality: Experts have said there's little evidence proving mail-in voting leads to election fraud. Meanwhile, Postmaster General Louis DeJoy told a House committee yesterday that the Postal Service is "fully capable" of handling mail-in voting and that he plans to cast his ballot by mail. A good reminder to make your voting plan early.

What's the rest of the party saying?

The RNC's first night kicked off with a message of "promises made, promises kept." We heard from Americans nationwide – some of whom survived COVID-19 – as they applauded Trump for his response to the pandemic (and his jokes about hydroxychloroquine). Trump campaign official Kimberly Guilfoyle's support for the president of "law and order" was heard from miles away. Her boyfriend, Donald Trump Jr, spoke about the "Great American Story" his father helped create. Former Ambassador to the UN Nikki Haley said it's "a lie" to say America's racist. And Democratic state Rep. Vernon Jones (GA) claimed Dems don't want Black people to leave their "mental plantation." To close the night out, Sen. Tim Scott (R-SC) highlighted "Joe Biden's mess," including his comments about Black Americans. And warned that a Biden-Harris ticket would make America a "socialist utopia."

Tonight, we'll hear from first lady Melania Trump. And the GOP will continue to make its case as Trump faces a tough re-election fight as he oversees a country with a pandemic that has killed more than 176,000 Americans, an economy with millions who are unemployed, and racial injustice that's led to protests from coast to coast. On top of that, they'll try to get Americans to vote red at a time when there's no unified plan for how to vote safely in 70 days.

The country is facing an unprecedented election – from the number of Americans that could vote by mail to the length of time it might take for the results to come in. And while it could be a logistical challenge, the president's claims could cast further doubt on the election process.

What we're learning something new about...

COVID-19. Yesterday, researchers from the University of Hong Kong reported the first confirmed patient to be reinfected with COVID-19. Pause to scream. The 33-year-old man had mild symptoms when he first tested positive for the virus in March. He was reinfected more than four months later – but didn't have any symptoms the second time around. Researchers said the case showed recovered patients may only have immunity for a short amount of time. But said there's no cause for alarm as this is how immunity should work. And that people who had the coronavirus should still get vaccinated (once there's a vaccine available) to keep them from getting sick again.

TikTok. Yesterday, the Chinese-owned video-sharing app sued the Trump admin for trying to ban it in the US. Reminder: President Trump's threatened to ban the app that he says poses a national security risk because of its Chinese ties. And earlier this month, he signed two executive orders targeting the company, including one that bans any US company from doing business with it. That order is set to go into effect next month. But TikTok claimed the admin violated its due process rights and didn't provide any evidence to back up the claim that it's a national security threat. And said that this is part of Trump's "anti-China" election strategy. No comment from the admin.

Where protests continued for a second night…

Kenosha, WI. Last night, hundreds of people protested after police shot a Black man, Jacob Blake, multiple times in the back on Sunday. Blake's family's attorney says he's in stable condition in an intensive care unit – and that his three kids saw the shooting. Demonstrations started peacefully yesterday but later turned violent. Some protesters set fires and threw water bottles at officers, who used tear gas on the crowds. The Wisconsin Department of Justice is investigating the shooting and the officers involved have been put on leave.

Who doctors are watching closely...

Alexei Navalny. Yesterday, doctors in Germany said tests have indicated the Russian opposition leader was poisoned. Navalny is one of Russian President Vladimir Putin's most well-known critics and was blocked from running for president himself in 2018. Last week, Navalny became sick on a flight in Russia and was transferred to a German hospital over the weekend. Doctors still don't know exactly what drug he was given but said it's typically found in pesticides and chemical warfare – and can be used to treat dementia. Navalny's still in a medically induced coma but doctors say his life's not in danger. German Chancellor Angela Merkel is pushing for an investigation.

What wasn't ready for the first day of school…

What's got us singing 'the best thing in the world'...