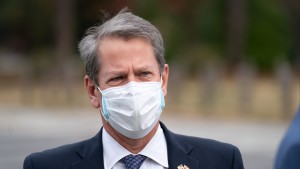 Yesterday, Georgia Gov. Brian Kemp (R) signed a Republican-led state bill that imposes new voting restrictions. It's the latest state to pass such a bill since President Biden won the election. But there could be more in the works: A nonpartisan org found that there are over 250 bills across 43 states that are trying to curb voting access.

What's in this one?

A lot. It cuts the time people have to request an absentee ballot and requires new identification for them. It limits the use of ballot drop boxes, shortens the early voting period for runoffs, and gives the Republican-controlled legislature more power to decide how elections are run. On top of that, it makes handing out food and water in poll lines a crime. Now, voting rights advocates say 'this is what voter suppression looks like.' And the irony of the timing isn't lost on them.

Amid the pandemic, Georgia – like many states – allowed residents to mail in their ballot for the general election instead of risking infection at the polls. The Peach State went blue for the first time in nearly 30 years. And in the January runoff, Democrats won both of Georgia's Senate seats for the first time in nearly two decades. It was the highest voter turnout for a runoff in the state – largely credited to people like Stacey Abrams who fought to get Georgians registered to vote. And focused on getting underrepresented voters (think: Black and minority voters) to the polls.

Kemp said this bill is a step toward making sure "elections are secure, accessible, and fair." But many protested the bill's passing and pressured Atlanta-based companies (like Coca-Cola and Delta Airlines) to do the same. Democrats and voting rights activists say it disproportionately hurts voters of color – especially since communities of color already face issues at the polls, like long lines and limited polling stations. In his first formal press conference (more on that below), President Biden called the GOP's efforts "sick," "pernicious," and "un-American" – comparing the restrictive voting bills to Jim Crow-era laws that targeted Black Americans' rights.

Georgia's still reeling from a mass shooting that shook the country to its core. And while some state lawmakers have made moves to address that, most are focused on voter restrictions that could make matters worse for communities of color.

Guns...In the wake of two recent mass shootings that claimed 18 lives in Colorado and Georgia, Biden said it was up to Congress to make big gun legislation moves. And that he's considering taking executive action on things like background checks and programs to combat community violence.

Immigration…Despite mounting criticism from both sides of the aisle, the president gave "no apologies" for reversing Trump-era immigration policies. He argued migrant surges are nothing new. And said the admin is working hard to move kids out of crowded facilities and connect them with family in the US.

COVID-19…The president announced his admin's goal to get 200 million doses in American arms by his 100th day in office. That's double the number of doses he had promised in December. And he wants to get the majority of K-8 schools fully open. All in 34 days.

And just like in your 5pm Zoom meeting, things were pretty calm. Biden also claimed he was in favor of changing up the filibuster (when lawmakers talk endlessly on the Senate floor to block voting on a bill) – a move he said was being "abused in a gigantic way." Oh, and he plans to run for re-election in 2024. Let's get through 2021 first.

Who's thinking about mothers...

Health experts. Yesterday, a new study said the Pfizer-BioNTech and Moderna coronavirus vaccines are effective and safe for pregnant and lactating women. And that they can pass antibodies to their babies. The CDC says pregnant people are at an increased risk for severe COVID-19. But early vaccine trials have largely left out pregnant women – making it difficult for them to decide whether to get vaccinated. Now, researchers say they found antibodies in umbilical cord blood and breast milk samples – suggesting that the vaccine can protect the mother, and the baby as well.

New Zealand. Earlier this week, its Parliament unanimously approved a bill that would give mothers and their partner three days of paid leave after suffering a miscarriage or stillbirth. It's one of the first countries in the world to provide this type of leave. The gov says it would allow people "time to come to terms with their loss" and not have to use sick leave. The bill could become law in a matter of weeks.

PS: It's time we all got talking about miscarriage. Here's our guide to everything you need to know about pregnancy loss, from how common it is (very) to how to help someone going through it.

What's saying 'changes need to be made'…

SCOTUS. Yesterday, the Supremes voted to expand people's ability to sue police for excessive force. The ruling stems from a 2014 case – where a New Mexico woman fled from officers believing they were carjackers, and they shot her. She sued. But lower courts dismissed her lawsuit, saying she hadn't been seized by officers so she couldn't argue there was excessive force. Now, the Supreme Court is saying 'actually, she can...and so can everyone.' This comes as police officers have been accused of using excessive force on protesters and Black Americans nationwide. Events that have reignited the conversation around qualified immunity.

Jessica Walter. Earlier this week, the award-winning actress – known by many as the beloved matriarch Lucille Bluth in "Arrested Development" – died at age 80. In her six-decade career, she had roles in theater, film, TV, and won an Emmy for her starring role in "Amy Prentiss" in 1975. Her co-stars remembered her as "an absolutely brilliant actress and amazing talent" with a "cracking sense of humor." RIP.

Who's formally drawing a line…