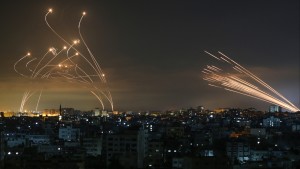 Israel and Gaza agreed to a ceasefire.

The most recent bout of conflict between Israelis and Palestinians began earlier this month, amid tensions in the East Jerusalem neighborhood of Sheikh Jarrah and violence at Al-Aqsa Mosque. Since then, Hamas – the Palestinian militant group that runs Gaza – has fired more than 4,000 rockets into Israel, roughly 90% of which were intercepted by its missile defense system. In response, Israel has carried out hundreds of airstrikes. More than 240 people – the large majority of them Palestinians – are reported to have been killed in the violence, including dozens of children.

Tell me about the ceasefire.

After 11 days of violence and mounting pressure from countries across the world (most recently including the US), the two sides reached an agreement. Yesterday, Israel's security cabinet unanimously approved a ceasefire – which went into effect overnight. Hamas said the pause in hostilities would be "mutual and simultaneous." The ceasefire held overnight, with no exchange of fire through morning local time. Now, the two sides maintain that how long the ceasefire holds could depend on the other's actions.

Egypt, which mediated the ceasefire, is sending security delegations to the region to make sure the agreement holds. President Biden called the moment a "genuine opportunity" for long-lasting peace. And said the US would work with the UN to offer "rapid" humanitarian assistance in Gaza while also working to "replenish" Israel's missile defense system. It comes as a group of progressive lawmakers have been pushing to block a pending arms sale to Israel.

After twelve days, hundreds of lives lost, and more than 52,000 people displaced, Palestinians and Israelis are experiencing a break from the rocket fire and missiles. But the question remains: for how long?

PS: Our podcast "Skimm This" breaks down how the US's relationship with Israel is dividing political parties stateside.

What lawmakers are tackling…

Security. Yesterday the House voted 213-212 to approve $1.9 billion to fortify the Capitol. Lawmakers are looking to beef up security after insurrectionists – most of them supporters of former President Trump – stormed the Capitol on Jan 6. The funds would be used to install things like new cameras, erect a fence, and increase security for lawmakers in DC and at their district offices. This year, threats against Congress have more than doubled compared to 2020. Now, the bill will move on to the Senate, where it could get turned down.

Anti-Asian hate. Yesterday, President Biden signed the COVID-19 Hate Crimes Act into law, with overwhelming support from both chambers of Congress. The act would order the Justice Dept to put hate crimes at the top of its review list – especially those against Asian Americans and Pacific Islanders. Here's what else is in it: resources for local law enforcement to document violence. Directing HHS to work with local communities and raise awareness of hate crimes against the AAPI community. And an online reporting system that could help victims come forward. VP Kamala Harris said she hopes it "brings us one step closer to stopping hate."

PS: We spoke with Stop AAPI Hate co-founder Manjusha Kulkarni about her organization's impact following spikes in hate incidents across the US.

Whose number you should probably dust off...

Your OB-GYN's. Earlier this week, a new study showed that cervical cancer rates have dropped within the last two decades – all thanks to regular screenings and the HPV vaccine. But in not-so-sexy news, other cancers caused by HPV (like oral, throat, or rectal cancer) are on the rise – in both men and women. Nearly 80 million sexually-active Americans are currently infected with HPV. And while most infections go away without treatment, a rare few (think: nearly 36,000 cases each year) develop into cancer. Friendly reminder: If you skipped your check-up in 2020 because of the pandemic, it's time to make that appointment.

Psst…here's the when, why, and how often you should set up your checkups.

Who's issued a royal apology...

BBC. Yesterday, after an investigation found that journalist Martin Bashir used deceit to nail the famous 1995 interview with Princess Diana, the broadcast company apologized. The probe found that Bashir used forged documents to manipulate Lady Di into doing the bombshell interview – where she candidly spoke about her failing marriage and struggles with mental health. Princes William and Harry condemned the company's failure, with William saying the deceitful methods used to secure the interview worsened his mother's feelings of fear, paranoia, and isolation. Harry pointed out that these media tactics are "still widespread today."

Microsoft. Earlier this week, the tech company finally read the room and announced it's retiring Internet Explorer. Launched in 1995, the web browser dominated in the days of AOL, butterfly clips, and tiny backpacks. But it's not like the phrase 'let me Internet Explore that for you' ever caught on. Now, Microsoft's left Googling how to throw a retirement party. RI(htt)P.

When you wanna see more of P!nk…

You can this weekend.

What pairs well with sweet...