Breaking Down QAnon And Its Conspiracy Theories 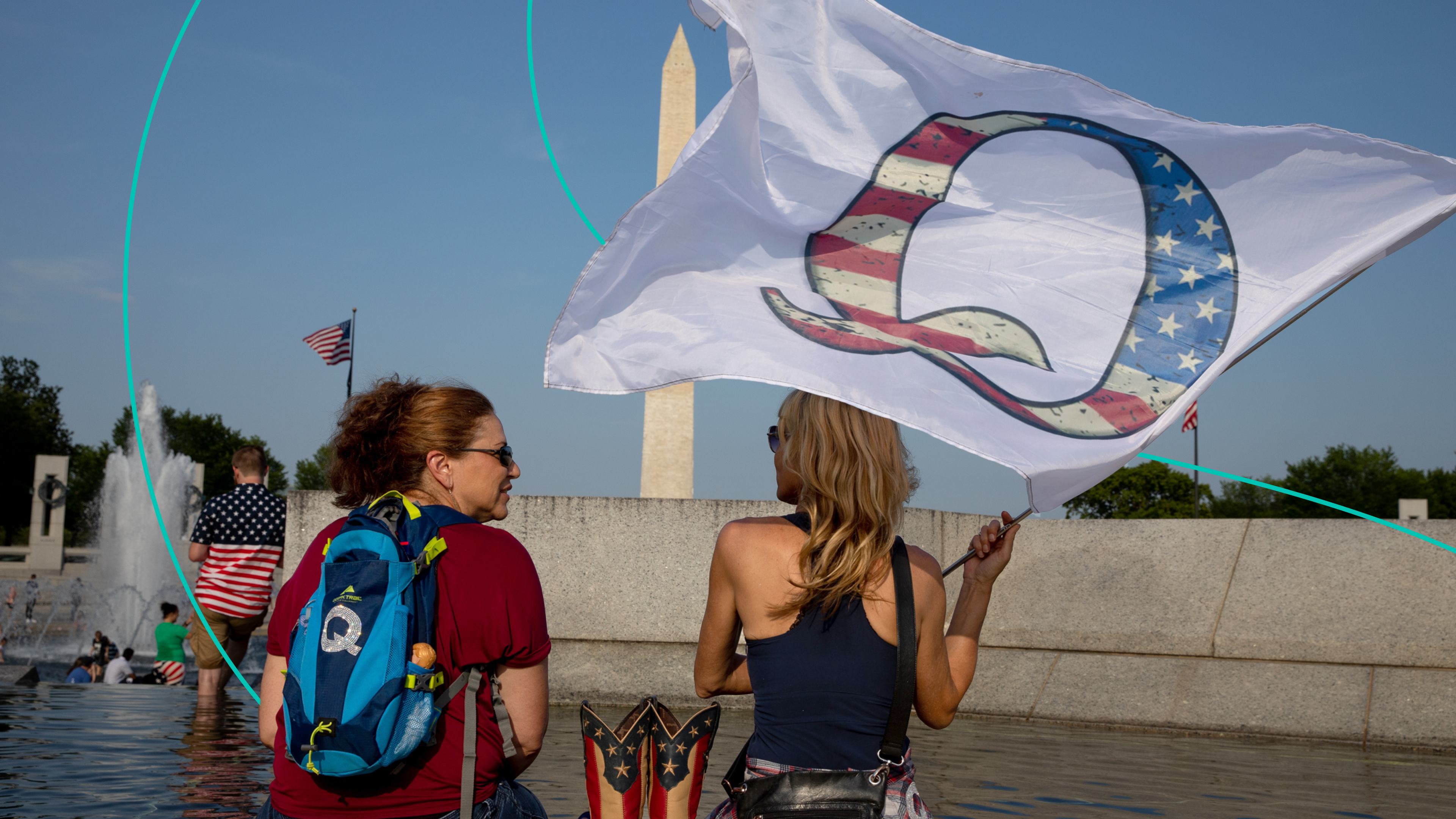 Over the past four years, QAnon (aka a set of unfounded fringe internet conspiracy theories) gained a huge following from America's far-right. But it wasn't until 2020 that it made its way into mainstream culture. Now we've heard it mentioned in headlines, documentaries, and even in Congress. (Remember: The House got its first QAnon-supporting members in the 2020 election.) But many are still left wondering "what is it?" Here, we'll answer your QAnon Q's — including how the viral pro-Trump theories started and where it's going. And for some believers, that answer is likely jail.

QAnon is not just one baseless conspiracy theory — it's many. And at its core, followers believe: That the world is run by Satan-worshiping pedophiles in the biz, gov, and media worlds. And that these (read: falsely accused) child molesters include top government figures like President Biden, former President Barack Obama, former Secretary of State Hillary Clinton, and billionaire investor George Soros — all Democrats. (Ixnay on Republicans, apparently.) Celebs like Oprah Winfrey and Ellen DeGeneres. And even religious figures like Pope Francis.

In QAnon’s war against this faction, its emerging hero is former President Donald Trump. Supporters believe the military recruited Trump to run for president — so he could take down the evil cabal (think: a secretive clique). The Satanic pedophiles would be arrested. Some would be imprisoned at Guantánamo Bay. And others, executed.

Here are a few other key terms to better understand the phenomenon. Flag these for your next Mad Libs game.

Another 'Q,' how did this start?

As all 21st-century stories do: the internet. In October 2017, an anonymous account called Q Clearance Patriot surfaced on the message board 4chan. Aka a completely anonymous internet forum. (Or Reddit’s older brother.) The poster, nicknamed “Q,” claimed to be a high-ranking government insider with Q clearance. Think: a super high security authorization only given to certain people in the Department of Energy. And includes access to “special nuclear material.”

Q’s posts claimed that Trump was at war with the deep state. And that the former president would reveal and arrest the evildoers. Cue, (or, Q, if you will), the Storm. It’s unclear why Trump was chosen as the leader. But Dr. Joseph Uscinski, professor of political science at the University of Miami, said that Trump’s personal beliefs aligned pretty well with QAnon.

“His entire message was that Washington is corrupt and that only an outsider can fix it,” Uscinski said. “So once you look at the views of people who claim to be QAnon believers, this all starts to make sense.”

QAnon has been hailed as a far-right conspiracy movement. And research points to a more right-leaning following: A 2020 Economist/YouGov poll found that nearly 30% of Republican respondents were very favorable or somewhat favorable of QAnon. Compared to about 5% of Democratic pollers. Republicans were also more likely to not know how to feel about it, at 37% vs 8% of Democrats. But Uscinski added that it’s not that political. Q followers are “more anti-establishment, by nature.”

Uscinski has studied and written about conspiracy theories for over a decade. And emphasized how this concept isn’t the first of its kind. “Ideas about there being a deep state have been around for decades. Ideas about satanic cults doing ritual sex abuse have been around for decades, if not centuries, or even millennia,” he said. “Even the idea that a pedophile deep state is working against the president isn't new.”

And QAnon, like many other early conspiracy theories, holds antisemitic roots. Kathryn Olmsted, historian and history professor at UC Berkeley, said, “This goes back to the medieval era in Europe with the blood libel conspiracy theories, where Christians believe that Jews were kidnapping their children and then using their blood for religious rituals.”

“Part of the appeal of QAnon is that people like to solve puzzles,” Olmsted said. “The best conspiracy theories are often like mysteries, where you want to solve the mystery.”

Since then, Q has left nearly 5,000 breadcrumbs. And no topic is too far-fetched: Covid-19 being a hoax, the existence of UFOs, 9/11 as an “inside job,” JFK Jr. faking his own death. But since December 2020, Q hasn’t posted. This isn’t the first time Q’s gone AWOL. But nobody knows why they’re playing the silent game. And the absence has left followers in a frenzy.

Who are QAnon's followers?

It’s not just 30-year-olds in their moms' basements. It’s people across genders, ages, races, religions, and education levels. Research from the Public Religion Research Institute shows that 15% of Americans believe the main tenet of QAnon. Followers would incorporate the messages into pro-Trump slogans and repeat them at rallies.

QAnon has also gone international. A CNN study found that Europe, Germany, Italy, France, and the UK had the highest engagement with QAnon on Facebook outside the US. The activity sharply increased in the latter half of 2020.

And with technology, followers have been able to connect and find each other easier, Olmsted added. While QAnon began on the fringe message board 4chan, it gained ground on larger social media platforms like Facebook, Twitter, and Instagram. A report by the Institute for Strategic Dialogue (ISD) found a significant increase in QAnon discussions on Facebook and Instagram in 2020. Same for the number of unique users engaging in QAnon convos via Facebook and Twitter.

Yes. Social media has helped unite and organize Q followers, especially surrounding the violent events of Jan. 6. Research shows a sharp increase in online QAnon-related activity leading up to the Capitol siege. But before that, many point to “Pizzagate” as a precursor to QAnon’s violence.

In 2016, an online conspiracy theory floated around the internet that top Democrats were running a child sex abuse ring in a DC pizzeria basement. And a North Carolina man drove over 300 miles to the pizzeria — with a loaded assault rifle. Spoiler alert 3.0: There was no basement in the store. Thankfully, no one was injured. The shooter was sentenced to four years in prison.

Some 15% of Americans in the PRRI study believe that “true American patriots may have to resort to violence in order to save our country” because they say “things have gotten so far off track.”

Enter: the Capitol insurrection. Aka a big display of domestic extremist violence. (Reminder: A pro-Trump mob stormed the Capitol after Trump spoke at a presidential rally.) Among the mob were, you guessed it, QAnon followers. There’s controversy over whether Trump’s speech egged on the violent supporters. When all was said and done, the Capitol insurrection left at least 140 injured and five dead. Rioters smashed windows, vandalized offices, and caused at least $1.5 million worth of damages.

Jacob Chansley — aka the “QAnon Shaman” — became a quasi mascot of the event. He stormed the Capitol wearing a fur headdress and face paint, while yelling into a bullhorn and carrying an American flag attached to a spear. Quite the sight. Chansley was sentenced to 41 months in prison for his role.

Psst...Learn more about what happened in the aftermath of the insurrection here.

Other violent instances have followed. Including…

Olmsted, who has extensively researched and written about gov conspiracy theories, explains that avid conspiracy theorists can become violent — if they feel threatened enough. “Some people might be inspired to violence if they believe that their political opponents are actually evil. Not just wrong, but evil,” she said.

What is the Future of QAnon?

There’s no breadcrumb for that. After the Capitol insurrection, social media giants including Facebook and Twitter cracked down on QAnon groups and accounts. QAnon content has since declined on those platforms. But it hasn’t stopped. Instead, followers just shifted to alternative social media services like Gab and Telegram.

Q, however, remains silent. With Q ghosting its followers and Trump OOO, some believers have refocused their efforts. Whether it’s undermining coronavirus vaccines, waiting in the rain for JFK Jr.’s return, or even running for office.

But with QAnon prophecies not coming to fruition, the FBI is worried about future violence. In June, the bureau issued a warning about a rise in violence from domestic extremist groups. Including QAnon. It’s concerned that followers will grow angry or restless with the unfulfilled prophecies. And take that frustration offline. Possibly “engaging in real world violence.”

Meanwhile, in 2022, nearly 50 QAnon-engaging candidates will run for Congress, according to a Media Matters investigation. The left-leaning website based this list off of politicians’ social media posts and public comments in which they “endorsed or gave credence” to QAnon. And some are already in the House. See: Reps. Lauren Boebert (R-CO) and Marjorie Taylor Greene (R-GA). They were both elected in 2020 and are running for re-election. Local elections also witnessed some QAnon-related victories that year.

Whether the movement develops or dissolves, Uscinski said people will always believe what they believe.

“If you take away the QAnon, if they give that up, they're still the exact same person with all the same political views and views about society,” Uscinski said. “They're still prone to conspiracy beliefs. They still hate the system, and they still have a bunch of views that are probably detached from reality.”

Psst...QAnon can be a touchy topic. Especially around friends or loved ones with differing views. If you’re going home for the holidays and worried about those convos, we have tips on how to navigate them here.

QAnon's unfounded conspiracy theories aren't anything new. But they can have dangerous effects. As they continue to hit the mainstream's attention and spread misinformation, it’s important to remember that research matters. Especially as the COVID-19 pandemic rages on, and we enter a new election cycle in 2022.