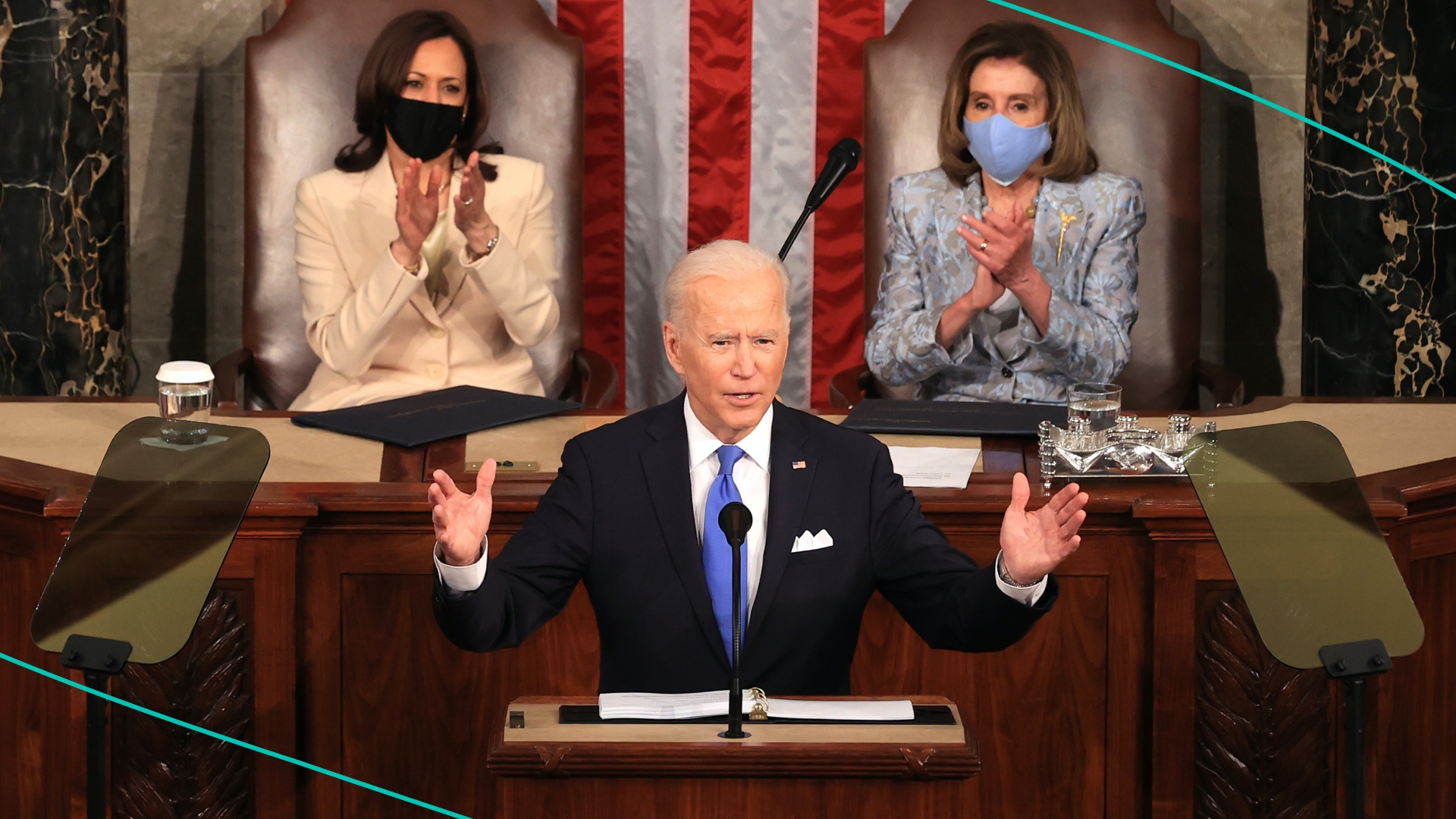 Mark your calendars: On March 1 at 9pm ET, President Biden will deliver his first State of the Union address since becoming #46. Reminder: Every year, presidents address Congress to talk about how the US is doing. Plus their goals for the coming year.

A lot has changed since Biden’s last joint address to Congress in April — from record inflation, to shifting attitudes toward COVID-19, to Russia invading Ukraine and disrupting peace in Europe. His approval rating has also taken a hit since then. One analysis says about 40% of Americans approve of him — more than a 10% drop from where ratings stood about a year ago. (For context, President Trump’s approval rating for his first SOTU stood at 39%.)

You can catch Biden’s speech on major news networks, streaming platforms, and C-SPAN. In the meantime, we Skimm’d what you can expect, who’ll be in the audience, and why security’s top of mind.

The Speech Notes on the Index Cards

Since we can barely remember what we did over the weekend, we’ve taken a walk down memory lane and rounded up what’s happened (and hasn’t happened) during Biden’s presidency so far.

Inflation is ballooning: In case your bank account hasn’t given you the message, prices are going up. In January, US inflation reached a 40-year high — up 7.5%, as demand struggles with supply in part because of shortages caused by the pandemic. And many Americans are feeling the brunt of it. One survey found that nearly 50% of respondents said rising prices have caused hardship for their families. Plus, a recent poll found that Americans believe inflation is the country’s most pressing issue. Biden’s address is expected to focus on efforts to curb rising prices.

Russia and Ukraine: On Feb. 24, Russian President Vladimir Putin invaded Ukraine in what many see as a bid to rebuild the Soviet Union. The Biden admin’s issued the harshest sanctions yet against the Kremlin. And has provided ammunition and military equipment to Ukraine. The president has maintained that American troops will not fight in Ukraine — something the majority of Americans support. But he added that if Russia crosses the line, the US “will defend every inch of NATO territory with the full force of American power.” White House officials said Biden’s speech will have a major focus on the conflict and national security.

No paid family leave: COVID-19's impact made it crystal clear that families suffer without a federal paid family leave policy. It affects their mental health, livelihoods, and ability to care for new additions to or older members of their families. Biden’s Build Back Better plan was supposed to be the answer — but even slimmed-down versions never made it past the Senate. And as of today, the bill is largely considered "dead.” Unclear if Biden will hit 'restart' on efforts to implement paid leave — one of his key campaign promises. It’s also unclear if Biden will focus on this failed agenda item in his speech.

Biden — like most presidents before him — will likely tout the major accomplishments he's made throughout his first year in office. For President Obama, it was making moves to rebuild the economy. For President Trump it was taking credit for a rising stock market. And for Biden, it's...

The American Rescue Plan: Aka Biden’s first legislative win. The $1.9 trillion measure was signed into law less than a year ago to keep the economy going through the pandemic. (Remember, this was when cases had already reached their peak before Omicron). Under the law, many Americans received $1,400 stimulus checks and extended unemployment benefits. Plus billions in aid went to schools, restaurants, and local and state govs. Republicans largely saw the package as too expensive. But Democrats saw it as necessary, saying ‘hi, we’re in a pandemic.’

COVID-19 milestones: More than 75% of the US population has received at least one dose of a vaccine. It’s a big victory in the fight against a pandemic that’s claimed more than 930,000 US lives. Now, many states are lifting mask restrictions as new treatment options become available and cases start to drop following the Omicron variant’s spike. It comes as a growing number of Americans are asking ‘is the virus over yet?’ And as the Biden admin figures out its plan for the next stage of the pandemic. Days ahead of the speech, the CDC loosened its guidelines for masks in public indoor spaces. But it's still TBD if we get more details on the Biden admin's plans come March 1.

The end to the war in Afghanistan: The US officially pulled out of Afghanistan — something two of his predecessors (Trump and Obama) couldn’t do. But the US's withdrawal was messy and chaotic. In a matter of days, the Taliban re-took the country. Bringing instability to the region, causing Afghan women's rights to deteriorate and leading to a near-famine. All of which could leave a stain on Biden's presidency.

The infrastructure bill: Biden’s $1.2 trillion infrastructure measure was signed into law in Nov. 2021. It’s considered a big bipartisan win. And a huge facelift for America. The funds make up the biggest investment in the country’s infrastructure in more than 10 years. Which will go toward things like renovating roads and bridges, and giving the EV industry and broadband a boost. But it's already facing setbacks: In January, gov officials reportedly said a lot of the work is on hold. That's because Congress hasn't passed a long-term spending bill yet — blocking money from going to certain projects.

What’s a main event without a pregame or afterparty? Already, there are security concerns ahead of the big speech. Plus, Biden won’t be the only one taking the podium. Here’s what else you need to know:

The Truckers are Expected to Roll Out

Honk if you feel like protesting. Like the “Freedom Convoy” protests in Canada and other parts of the world, people are calling for an end to coronavirus measures (think: vax and mask mandates). And they’ve brought cities to a standstill to try to get govs to listen. Now, two convoys — from Pennsylvania and California — are headed to DC and could disrupt the SOTU. The Pentagon has approved 700 National Guard troops to provide extra security in the DC area. US Capitol Police and local gov agencies made the requests for backup. Meanwhile, the White House said it’s “closely watching” the convoy reports.

Who’s Going to Be In the Audience?

All 535 members of Congress have been invited to attend the SOTU. But lawmakers will have to follow some COVID-19 protocols. Including wearing a K/N95 mask the entire time, submitting a negative PCR test before attending, and social distancing. Anyone who breaks the rules will be removed. Oh, and members can’t bring any plus ones (which they’re usually allowed to do).

The invitation to all House and Senate members signals a loosening of COVID-19 restrictions on the Hill. (Reminder: At Biden’s last joint address to Congress, only 200 members could attend.) But it’s unclear who’ll actually show up. Republicans haven’t been a big fan of mask mandates and have broken the rules in the past.

Who’s definitely not attending? The “designated survivor.” Aka a Cabinet official who essentially has to go into hiding in case anything happens to the president or others in the line of succession. Chances are that won’t be Kiefer Sutherland this time.

Then there’s the afterparty. Rep. Rashida Tlaib (D-MI) is giving the Dems' response to Biden’s speech. “The Squad” member’s expected to call out Republicans and Democrats for stifling Biden’s agenda (see: Build Back Better above). But there will also be a Republican response brought to you by Gov. Kim Reynolds (R-IA). Republican leaders have praised her response to the pandemic, including things like blocking mask mandates in schools. She’s expected to talk about the pandemic and lay out the party's agenda to Americans ahead of the midterm elections.

The stakes are high for Biden’s first State of the Union address. And it comes as the US faces challenges on the world stage and on the home front. How the president relays America's position on key issues like inflation, the pandemic, and Russia could further make or break Democrats in the November midterms — when the fate of the House and Senate hangs in the balance.