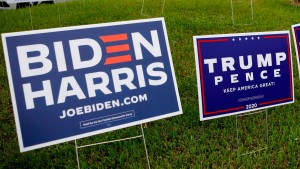 The US is officially one day out from Election Day.

You know it. Let's start with a walk down memory lane...we began the election cycle watching over a dozen people duke it out on the debate stage. And thought we saw the worst of our country's voting issues at the Iowa caucuses. Little did we know, many would become deeply invested in the USPS. And the mute button. Now, Nov 3's officially less than 24 hours away. And there's no better time to get a refresher on what's at stake in this election than now:

The Presidency...It's President Donald Trump vs former VP Joe Biden. Ever heard of them? Trump wants to get reelected to another four years. And Biden wants his job. They're both vying for the votes of nearly 240 million eligible voters and 538 electors. If you need a refresher on where they stand on the issues, we've got it here.

The Senate...Republicans hold a 53-47 majority. And they've played a crucial role in getting three new justices in the last four years. There are 35 Senate seats up for grabs tomorrow: 23 red and 12 blue. Democrats not only need to keep the 47 seats they have but also gain four if they want to ditch their minority status. Or, they need to add three seats and the presidency to call the shots – since the VP breaks any tie votes. As for the GOP, they can lose up to three seats and still hold the majority, as long as Trump wins reelection. Some of the races where Republicans and Democrats are going head-to-head include: Maine, North Carolina, Iowa, Georgia, and Montana.

The House...Democrats have a majority in the 435-seat chamber of Congress. They've often butted heads with the other chamber on issues like coronavirus relief and police reform. All seats will be up for election tomorrow. And while Republicans have a solid chance to increase their side of the aisle, analysts say winning the majority may not be in the cards. Keep an eye out for close races in: New Jersey, New Mexico, Texas, and Minnesota.

Local races…where decisions that can affect your day-to-day are generally made. Each municipality has different races on the ballot. Think: for state legislature, city council, school board, and more. One study found that fewer than 15% of eligible voters turned out to vote for local elections. Meaning, a limited group of voters gets to decide what's in store for the future of their community. Reach out to your local election officials to find out more about your down-ballot races and make an informed decision.

Over 92 million Americans have already cast their ballot in an election happening amid a pandemic. If that's not history, we don't know what is. But tomorrow is the last day to make your voice heard in this election. So if you haven't done so already, find your polling location, read up on who's on your ballot, and go vote.

As the coronavirus rages on and people have had to adjust to a new normal, it's clear this year has been stressful. And tomorrow's general election may be adding to your stress and causing angst, no matter who you're voting for. Just know, you're not alone.

Americans are stressed: Last month, the American Psychological Association found that 68% of adults surveyed say the 2020 election is a significant source of stress in their life – up from 52% in 2016. Across the board, Republicans, Democrats, and Independents are significantly stressed. And Black adults had an even greater increase in stress from the election, from 46% in 2016 to 71% in 2020.

Whoosah: There are things you can do to help with that. The APA advises focusing on what you can control and encourages exercising and spending time with friends and family. You can also take time to breathe in and out, do a body scan meditation, and even the 12-12-12 challenge. Want to learn more ways to de-stress? We've got you.

COVID-19. Last Friday, the US reported nearly 100,000 new coronavirus infections in one day – the highest single-day number of cases recorded for any country. The record comes as health officials warn that cases will rise as the weather gets colder and people head indoors. Meanwhile, across the pond, the UK is going into lockdown mode. Starting Thursday, nonessential shops, pubs, restaurants, and gyms will close through at least Dec 2. But things like grocery stores, childcare, schools, and universities will remain open. This is after a rise of about 20,000 daily cases. But while the UK is days away from restrictions, Spain has already implemented theirs. And is now dealing with violent protests against the gov's 11pm to 6am curfew, which some protesters reportedly say will threaten their jobs.

Turkey and Greece. Last week, at least 64 people were killed and hundreds injured after a 7.0 magnitude earthquake struck the Aegean Sea. And since it's located between a Greek island and the Turkish coast, both regions felt the shake. It even caused a mini tsunami that flooded streets in Turkey. Rescue crews are working to find survivors under the rubble of several destroyed buildings. Turkey's president said at least 103 people had been rescued so far.

Sean Connery. Over the weekend, the Scottish actor died at age 90. His family said he passed away peacefully in his sleep. Connery is best known for playing James Bond. And was considered the best actor to play the character by many fans. He won several awards in the US and UK for his work, including an Academy Award for the 1987 film, "The Untouchables." He was also knighted by Queen Elizabeth II in 2000. James Bond producers paid tribute, saying Connery is "undoubtedly largely responsible for the success of the film series." And said they'd forever be grateful to the man that created the signature line, "The name's Bond...James Bond." RIP.

Johnny Depp. Today, the actor lost a high-stakes libel case against the publishers of The Sun – a tabloid in the UK. In 2018, The Sun published an article describing Depp as a "wife beater" and claiming there was "overwhelming evidence" he had assaulted actress Amber Heard repeatedly during their relationship. Depp sued the tabloid's publishers and sought compensation for damage to his reputation. But today, a UK High Court judge said The Sun proved that what they published was "substantially true." Heard testified on the tabloid's behalf and maintained she was telling the truth. Depp has denied the allegations.

What's getting us in the election spirit...

These "I Voted" stickers.