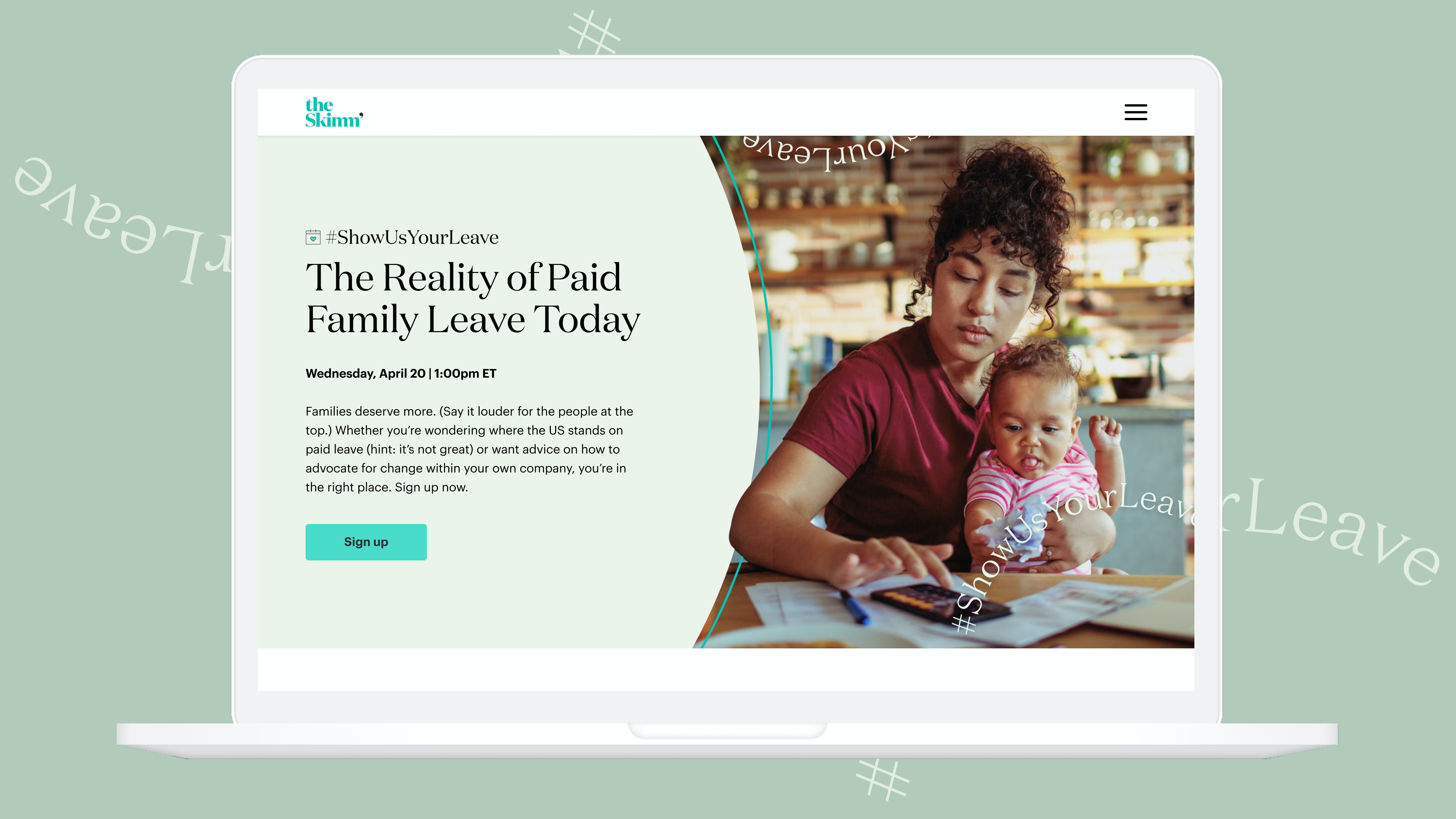 April 14, 2022 (New York, NY) – theSkimm today announced ‘#ShowUsYourLeave: The Reality of Paid Family Leave Today,’ a free virtual event on April 20, 2022 discussing the reality of paid family leave in the U.S. and how to fight for change at every level. The panel is an extension of theSkimm’s viral #ShowUsYourLeave movement, which started organically as a way to help expand paid family leave leader by leader, company by company and employee by employee, so that every American has access to the information and policies they need to support their families.

“theSkimm’s #ShowUsYourLeave initiative has really put a spotlight on the issues facing parents and caregivers. Paid family leave is imperative to providing them the support they need,” said theSkimm co-Founders & co-CEOs, Carly Zakin and Danielle Weisberg. “We continue to equip our audience with the resources and tools they need to advocate for change, but know there is so much more work to be done to highlight how this topic affects all Americans.”

A lack of paid family leave in the US is a reality that impacts everything from maternal mental health to infant outcomes to the wage gap. This virtual event will include expert conversations on how the U.S. handles paid family leave, how a lack of policies impacts women, advice on advocating for change, and more.

The free, one hour event – including a keynote and panel discussion – will take place on April 20, 2022 at 1pm ET. Led by theSkimm’s co-founders and co-CEOs Carly Zakin and Danielle Weisberg, they will be joined by keynote speaker Allyson Felix, Athlete, Mother, and Co-founder & President of Saysh, as well as panelists Allyson Bronner, Global Head of Family Advocacy for Morgan Stanley Institutional; Joi O. Chaney, Senior Vice President, Policy and Advocacy at the National Urban League; and Jenna Johnson, President of Patagonia, Inc.

During the first half of the panel – Part 1: How did we get here? – theSkimm’s co-founders and co-CEOs, Carly Zakin & Danielle Weisberg, will lead a keynote about where the U.S. stands on paid leave, how a lack of it leaves women behind, and how people in power can be allies in pushing for change. Topics will include:

The latter half of the discussion – Part 2: What now? – will bring together leaders across the industries to provide tactical advice on how to advocate for paid leave at a personal, company-wide, and federal level. Topics will include:

For more information and to register for ‘#ShowUsYourLeave: The Reality of Paid Family Leave Today,’ please visit theSkimm.com/showusyourleave.

theSkimm’s #ShowUsYourLeave campaign started with a candid post on social media, resulting in a rallying cry with hundreds of personal stories and experiences from our audience. Some stories were devastating, while others started sharing how this campaign inspired them to speak to HR and create change within their own company policies. We also launched a handraiser petition in support of a more expansive paid family leave policy and have received over 34K signatures to-date, which can be found at theSkimm.com/showusyourleave microsite, along with additional tools and resources. theSkimm then publicly and transparently shared the company's policy and called on other companies to do the same, igniting a conversation as to what people need to feel supported by their employers.

In March, theSkimm launched the #ShowUsYourLeave database, which features the more than 500 companies and organizations across industries who have joined our movement and shared their paid family leave policies. Not only does the database present our audience with market research and provide insights into the benefits & policies other employers are offering, but it also serves as an opportunity for companies to highlight how best to support their employees.