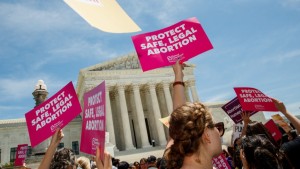 Not easily. It was often dangerous, expensive, and required women to travel far. In some cases, women tried to induce an abortion on themselves, by using coat hangers, throwing themselves down the stairs, or consuming poison. At least one physician operated undercover – and ended up getting arrested. It was possible, but difficult, to get an abortion safely: a 1966 story in The Washington Post quoted a doctor saying a woman could usually have a safe abortion in a hospital if psychiatrists attested that the patient was suicidal.

Decades after Roe v Wade passed, there’s an escalating push to get the Supreme Court to revisit the issue.

Since President Trump took office, he’s overhauled the nation’s courts by appointing dozens of conservative judges, including two to the highest court there is: the Supreme Court. That’s led to a push by red states to pass restrictive abortion laws that lawmakers know will be challenged in court. The goal: bring this fight to the Supremes at a time when the court has a conservative majority, and may be more likely to overturn Roe v Wade.

Nine states passed restrictive abortion bills this year. Most of those were so-called “heartbeat” bans – banning abortion once a fetal heartbeat is detected, typically around six weeks. These bills are controversial because many women don’t realize they’re pregnant at six weeks. But Alabama went the furthest, banning abortion in nearly all cases. The law made no exceptions for rape or incest and doctors could get up to 99 years of jail time if convicted of performing an abortion. State officials explicitly said that the law was drawn up as a challenge to Roe v Wade.

Are these laws in effect?

No. After legal challenges, all of them are on hold while they make their way through the court system.

So it’s happening, SCOTUS is weighing in?

On these particular cases, no. At least not yet. But the Supremes did agree to hear a different abortion case this term. It’s the first abortion case the court will hear since Justice Brett Kavanaugh’s confirmation tilted the bench solidly right. They’re going to hear arguments on a Louisiana law that requires doctors who perform abortions to have admitting privileges at a local hospital. Meaning they have permission to admit a patient to the hospital and provide certain care there.

What are the arguments?

Supporters of the law say it helps protect women’s health, because doctors with admitting privileges have to meet certain requirements. Critics say it would force nearly every abortion clinic in the state to close, since many providers don’t have admitting privileges. And that women can still get medical attention at hospitals even if their abortion provider doesn’t have those privileges.

We likely won’t find out until the end of the term next summer. But SCOTUS ruled against a nearly identical Texas law in 2016. And some say the court would only take up the issue again if it had something new to say about it. Until then, some states are pushing to solidify their own abortion laws in the event that the federal law changes.

Team It’s Not Just Your Life says that “preborn” babies are people too, and should be protected by the law. That the Alabama law gets several things right: punishing abortion providers instead of women who get abortions. And protecting babies conceived from rape or incest, who deserve a shot at life. They also argue that the “pro-life” movement is absolutely pro-woman.

Team Vote For Me (And Legal Abortion) is comprised of the 2020 Democratic presidential candidates. Traditionally, the Democratic party has advocated for abortions to be “safe, legal, and rare.” But the 2020 race has candidates pushing for abortion rights with little to no restrictions. And believing that voters feel the same. TBD how that works out because...

Team This is Complicated, which includes the majority of Americans, says that abortion should be legal. But with some restrictions in place, such as 24-hour waiting periods and hospital admitting privileges for doctors performing the procedure. At the same time, they say abortion should be allowed at any time during pregnancy if the woman’s life is at risk. And that doctors who perform abortions shouldn’t face fines or prison time.

On 2020...special interest groups on both sides of the issue are shelling out a lot of money on advocacy campaigns ahead of the 2020 election. Presidents have the power to nominate federal judges, the Senate decides whether to confirm them. Plus if the Supreme Court does take on Roe v Wade, depending on how it rules it may give state lawmakers more power to regulate abortion. Bottom line: everyone wants the White House, Congress, and local politicians on their side of the issue. And for some voters, it could be the driving force pushing them to the polls.

On access...right now, every state in the country has at least one abortion clinic. Regardless of whether and how the Supreme Court weighs in on this issue, some of these clinics are already in jeopardy. One high profile case comes from Missouri, where health officials are trying to shut down the last clinic in the state. Skimm Notes explains what’s happening there.

Meanwhile, if Roe v Wade were overturned, abortion policy would fall to states. Some states have trigger laws that would automatically outlaw abortion. Legal abortion rates would likely fall in some parts of the country. Poor people would be most affected, since the majority of people who get abortions are low-income and can’t afford to travel as far for the procedure.

On women...Roe v Wade solidified a woman’s legal right to make decisions about her own body. And there’s evidence that the law improved health outcomes. Before Roe v Wade, research shows that around 17% of pregnancy-related deaths were the result of an illegal abortion. Today, it’s rare that women who get legal abortions experience serious complications. New options like pills that induce an abortion have made the procedure safer. Meanwhile, the Supreme Court pointed out in the ‘90s that as women gained more reproductive freedom, they were able to participate equally in the economy.

Abortion is a complex issue that encompasses debates around privacy, women’s rights, and the role of government, as well as difficult questions about when life begins. For many Americans, it’s not as black and white as politics increasingly makes it out to be.