What A Post-Roe World Means for Women with Pregnancy Complications 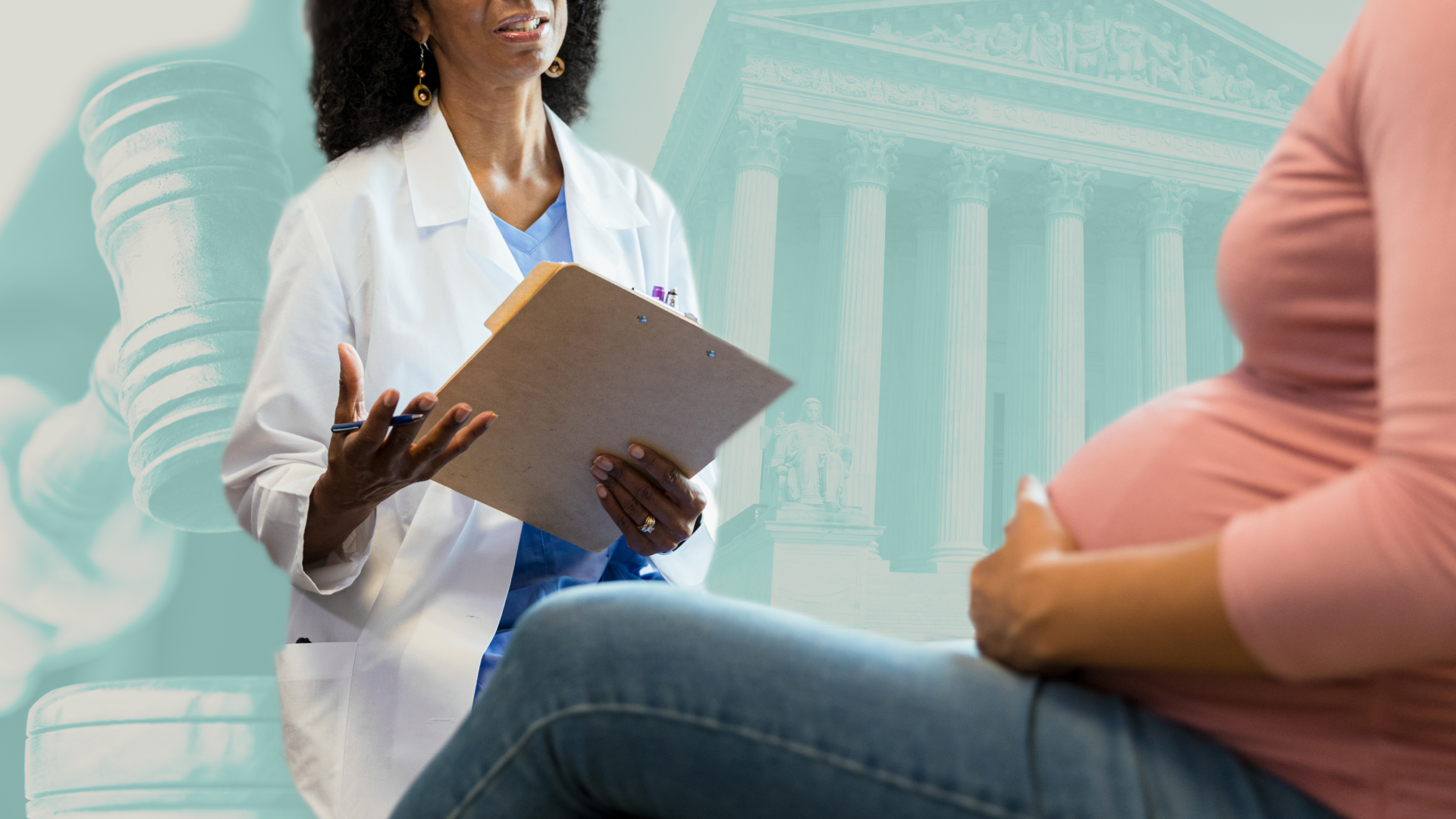 There are a number of reasons why a pregnant woman could choose to get an abortion. But let’s just focus on one right now: when an intended pregnancy gets unexpectedly complicated, putting the mother or her baby’s life at risk.

In this case, a patient might need an abortion. But they might not have that option, especially now that Roe v. Wade has been overturned.

That has left the authority over abortion laws to the states. Roughly half of them have indicated they’d move to ban or severely restrict abortion. That's including the 13 states with trigger laws. (The law is a near total-abortion ban meant to go into effect once Roe v. Wade was overturned or shortly afterward).

So access to an abortion in cases of a pregnancy complication could depend on a few factors. Among them: where you live, whether the issue is considered to be a “medical emergency” and counts as an exception to a state abortion ban, and/or whether a doctor is willing to put their livelihood at risk to offer care.

Quick reminder: Pregnancy is not a health-neutral event. While dangerous complications aren’t super common, they can happen in an estimated 8% of pregnancies, according to Johns Hopkins Medicine. And with Roe v. Wade overturned, accessing abortion care — even in those risky situations — will be altogether more challenging.

We need to talk about all of this.

So we called up Dr. Marta Perez, OB-GYN and assistant professor at WashU School of Medicine, to help us better understand why a doctor and a patient might deem access to abortion care essential for a risky pregnancy.

What are examples of pregnancy complications that could cause a patient and doctor to consider an abortion?

Placental abruption…When the placenta is separated from the uterine wall, most likely in the third trimester. It happens in about 1% of pregnancies. And Dr. Perez said it could lead to massive blood loss, putting the mother’s life in danger. If the placenta completely separates, the fetus might not be able to survive. Another risky placental condition in the third trimester: placenta previa. That’s when the placenta completely or partially covers the opening to the cervix, and can result in hemorrhaging.

Preeclampsia and eclampsia…When someone has high blood pressure and signs of liver or kidney damage during pregnancy (preeclampsia), and when the BP issue results in seizures (eclampsia). Preeclampsia is one of the most common complications of pregnancy, said Dr. Perez. According to the CDC, it occurs in about 4% of pregnancies. And it’s generally mild. But when it becomes severe, it’s life-threatening and the only treatment is delivering the baby, Dr. Perez said. “But if it happens at a periviable time, where the neonatologist doesn’t have the equipment or the technology to be able to care for the baby, then that is a ‘termination of pregnancy.’”

Cardiac or renal condition…When the mother has a preexisting heart or kidney condition that puts her life at risk. The risk can be so severe that some doctors might advise against getting pregnant altogether, Dr. Perez said. But some people don’t know they have an underlying condition until they get pregnant. “Pregnancy changes our body’s physiology in a lot of really complex ways,” she said. “[Someone could] transition from having a well-controlled heart problem to it acutely worsening during the pregnancy. It’s not something that everyone can predict. And the pregnancy becomes truly a risk to their life and health.”

Fetal anomalies…When there’s a developmental issue with the baby. Doctors can screen for many of these conditions (like Down syndrome) in the first trimester, but the tests are more accurate later in fetal development. It might not be until around the 20th week of pregnancy, Dr. Perez said, when an anatomy scan ultrasound can offer more info. At that time, a hopeful parent might learn about a genetic condition that indicates a fetus likely won’t survive the pregnancy or could die shortly after birth. “And if there’s a longer survival, it may be a quality of life that the parents decide is not something they want to put a child through,” Dr. Perez said.

Determining what the most compassionate path is — continuing with the pregnancy or not — is a decision that can require the input of pediatric geneticists and other specialists. As well as other people like psychologists and religious advisors. Getting those appointments, and considering the advice shared, could take weeks. Meaning people could run out of time to access an abortion in their state’s legal window.

What barriers to abortion already add extra risk for a pregnant woman with complications?

Waiting periods and mandatory counseling…When patients must receive state-approved counseling and wait a certain amount of time (think: 18 to 72 hours) before they can officially “consent” to getting an abortion. As of early June, 27 states required waiting periods. All of them, including Missouri — where Dr. Perez practices — waive the waiting requirement when there is a “medical emergency” or in cases of maternal life endangerment. But she said “some things qualify and others might not. It’s not black-and-white.” Which means pregnant women with dangerous conditions could risk their lives waiting for a legal abortion as their situation escalates.

Gestational limits…When it’s illegal to get an abortion after a certain point of pregnancy. Roe v. Wade established the constitutional right to an abortion before fetal “viability” (23-28 weeks of pregnancy). But now a number of states are set to prohibit abortions even earlier than that. According to the CDC, in 2019, about 90% of abortions happened in the first trimester. “Usually from people who want to make the choice to not be pregnant,” said Dr. Perez. But complications — whether they’re fetal anomalies or serious maternal conditions — might not come to light until at least the second trimester. And that’s the time period where abortion access has already been limited and where it will, post-Roe, be more restricted.

Insurance limitations…When there’s a ban on using private insurance to pay for an abortion. There are 11 states where this is currently a restriction — and even more states where abortion isn’t covered in health insurance plans for public employees, according to the Guttmacher Institute. In these states, people who need abortions — when accessible — might have to pay thousands of dollars for the procedure. Depending on where the procedure is done and how late in the pregnancy it is. Now that Roe v. Wade is overturned, some insurers might add coverage. But it’s likely that states will also add more limitations to insurance coverage.

Tell me about the exceptions for maternal health or a medical emergency in abortion bans.

There are exceptions to the “crime” of abortion in several anti-abortion bills, and they’re part of laws that have been in place or have been triggered now that Roe has been overturned. In Idaho, for example, abortion could be considered a “felony punishable by imprisonment” of two to five years, and a suspension of medical license. But there are exceptions in cases of “[preventing] the death of the pregnant woman.” Other states have exceptions worded differently. See: Texas and Oklahoma (for “a medical emergency” that puts the woman in danger), and Louisiana (allowed if continuing the pregnancy would lead to “death or substantial risk of death” of the pregnant woman). Note: A number of states are moving to limit even these exceptions.

In states where medical exemptions are available, some doctors, like Dr. Perez, say the wording is scary and confusing because it’s “very unclear what the ‘exception for maternal life endangerment’ means,” Dr. Perez said. For example, legislation doesn’t tend to list specific conditions or how serious they need to be — 5% risk of death, 50%, 95%? Take part of Idaho’s criminal abortion exception, which is worded this way: “The physician determined, in his good faith medical judgment and based on the facts known to the physician at the time, that the abortion was necessary to prevent the death of the pregnant woman.”

But sponsors of these bills are quick to defend them. Arizona State Sen. Nancy Barto told ABC News that the wording of her state’s 15-week abortion ban — which makes an exception when the mother is at risk of death or an impairment of a major bodily function— is “very clear, specific, [and] allows for the physician's good faith clinical judgment."

However, there might not be enough time to determine if the endangerment exception applies. And if the woman is required to observe the required wait period, her health could deteriorate further. For instance, if she was experiencing a placental abruption, she could die from massive blood loss in a matter of days, Dr. Perez said. So in effect, the health exceptions become open to interpretation by doctors, who could be accused of committing a felony for offering abortion care outside of their state’s often ambiguously worded exceptions.

“It’s really a gray zone. I mean, physicians don’t want to go to jail,” but they also want to make decisions in the best interest of their patients, Dr. Perez said. In the case of a pregnancy complication, getting an abortion “should be the patient and doctor’s choice. Not the politicians’ choice.”

With Roe in the rearview, people with intended pregnancies who face serious and potentially life-threatening complications will likely have a harder time accessing abortion. And even in states where abortion laws allow for exceptions in “medical emergencies,” access for risky pregnancies is far from a given.